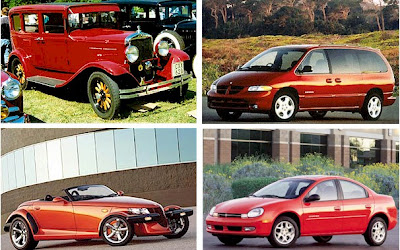 The final Plymouth rolled off a Chrysler assembly line in 2001. It was a silver Neon LX with a manual transmission. It was fitting that the last Plymouth was an economy car, because Walter P. Chrysler created the brand to attract entry-level customers.

The Plymouth was introduced on July 7, 1928. It was Chrysler Corporation's first entry in the low-priced field, then dominated by Chevrolet and Ford. Plymouths were actually priced a little higher than the competition, but offered standard features such as hydraulic brakes that the competition did not provide. Plymouths were originally sold exclusively through Chrysler dealerships.

When Walter Chrysler took over control of the trouble-ridden Maxwell-Chalmers car company in the early 1920s, he inherited the Maxwell as part of the package. After he used the company's facilities to help create and launch the Chrysler car in 1924, he decided to create a lower-priced companion car. So for 1926 the Maxwell was reworked and rebadged as a low-end Chrysler model. At the end of the decade this model was once again reworked and rebadged to create the Plymouth.

While the original purpose of the Plymouth was simply to cover a lower-end marketing niche, during the Great Depression of the 1930s the car would help significantly in ensuring the survival of the Chrysler Corporation when many other car companies failed. Beginning in 1930, Plymouths were sold by all three Chrysler divisions (Chrysler, DeSoto, and Dodge). Plymouth sales were a bright spot during this dismal automotive period, and by 1931 Plymouth rose to the number three spot among all cars.

For much of its life, Plymouth was one of the top selling American automobile brands, along with Chevrolet and Ford ("the low-priced three"). Plymouth even surpassed Ford for a time in the 1940s as the second most popular make of automobiles in the US. Through 1956, Plymouths were known for their durability, affordability and engineering. In 1957, Chrysler's Forward Look styling theme produced cars with much more advanced styling than Chevrolet or Ford, although Plymouth's reputation would ultimately suffer as the cars were prone to rust and sloppy assembly. The marque also introduced its limited production Fury line in 1956, and it too benefited from the crisp Forward Look designs.

The Plymouth brand lost market share rapidly in the early 1960s. While Plymouth was a styling leader from 1957 to 1958, its 1959 through 1962 models were awkwardly styled cars. Plymouth also competed with corporate sister division Dodge when the lower-priced, full-size Dodge Dart was introduced for 1960. Rambler, and then Pontiac would assume the number three sales position for the remainder of the decade. Plymouth went into a decline and never fully recovered.

The marque regained market share with the 1965 models, which returned Plymouth to full-size vehicles and more mainstream styling. Plymouth regained its traditional third place in the sales race in 1971 and 1974, primarily with its popular Valiant and Duster compact models; but Plymouth was hurt by Chrysler's financial woes of the late 1970s. Marketing decisions reduced the Plymouth lineup to the point that it was no longer a full-line brand. New models were increasingly given to the Dodge and Chrysler brands, but denied to Plymouth. By 1979, its lineup consisted of only the domestically produced Volare and Horizon models, and a number of rebadged Mitsubishi imports.

In the late 1990s, four vehicles were sold under the Plymouth name: the Voyager/Grand Voyager minivan, the Breeze mid-size sedan, the Neon compact car, and the Prowler sports car.

After discontinuing the Eagle brand in 1998, Chrysler was planning to expand the Plymouth line with a number of unique models before the corporation's merger with Daimler-Benz. The first model was the Plymouth Prowler, a modern hot rod. The PT Cruiser was to have been the second. Other than the Prowler, at the time of the takeover Plymouth had no unique products.

Furthermore, while all Plymouth dealers also sold Chryslers, many Dodge dealers sold only Dodge; thus it would cause much more dealer disarray to discontinue Dodge than it would to discontinue Plymouth. Consequently, DaimlerChrysler decided to drop the make after a limited run of 2001 models

The last new model sold under the Plymouth marque was the second generation Neon. The PT Cruiser was ultimately launched as a Chrysler, and the Prowler and Voyager were absorbed into that brand as well. (info from St. Petersburg Times and Wikipedia)
Posted by Michael N. Marcus at 4:22 AM