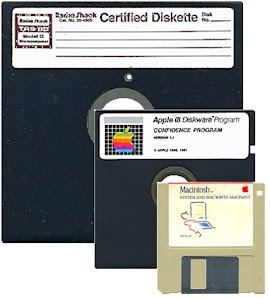 In 1967, IBM wanted to develop a simple and inexpensive system for loading microcode into their System/370 mainframe computers. The 370 was the first IBM computer to use semiconductor memory, and whenever the power was turned off the microcode had to be reloaded. Normally this task would be done with tape drives which almost all 370 systems included, but tapes were large and slow. IBM wanted something faster and and lighter that could also be sent out to customers with software updates for $5.

In 1973 IBM released a new version of the floppy that stored up to 250¼ kB on the same disks, and was read-write. These drives became common, and soon were being used to move smaller amounts of data around, almost completely replacing magnetic tapes. The IBM standard soft-sectored disk format was designed to hold just as much data as one box of punch cards.

When the first microcomputers were being developed in the 1970s, the 8-inch floppy found a place on them as one of the few "high speed, mass storage" devices that were even remotely affordable to the target market (individuals and small businesses). The first microcomputer operating system, CP/M, originally shipped on 8-inch disks. However, the drives were still expensive, typically costing more than the computer they were attached to in early days, so most machines of the era used cassette tape instead.

This began to change with the acceptance of the first standard for the floppy disk, and standardization brought together competitors to make media to a single interchangeable standard, and allowed rapid quality and cost improvement.

In 1976 two of Shugart Associates's employees were approached by An Wang of Wang Laboratories, who felt that the 8-inch format was simply too large for the desktop word processing machines he was developing at the time. After meeting in a bar in Boston, Adkisson asked Wang what size he thought the disks should be, and Wang pointed to a napkin and said "about that size". Adkisson took the napkin back to California, found it to be 5¼-inches (13 cm) wide, and developed a new drive of this size storing 98.5 KB later increased to 110 KB by adding 5 tracks. This is believed to be the first standard computer medium that was not promulgated by IBM.

The 5¼-inch drive was considerably less expensive than 8-inch drives from IBM, and soon started appearing on CP/M machines. At one point Shugart was producing 4,000 drives a day. By 1978 there were more than 10 manufacturers producing 5¼-inch floppy drives, in competing physical disk formats: hard-sectored (90 KB) and soft-sectored (110 KB). The 5¼-inch formats quickly displaced the 8-inch from most applications.

These early drives read only one side of the disk, leading to the popular budget approach of cutting a second write-enable slot and index hole into the carrier envelope and flipping it over (thus, the "flippy disk") to use the other side for additional storage. This was considered risky by some, the reasoning being that when flipped the disk would spin in the opposite direction inside its cover, so some of the dirt that had been collected by the fabric lining in the previous rotations would be picked up by the disk and dragged past the read/write head.[citation needed] In reality, since some single-head floppy drives had their read/write heads on the bottom and some had them on the top, disk manufacturers routinely certified both sides of disks for use, thus the method was perfectly safe.

Floppy disk write protect tabs. These sticky paper tabs are folded over the notch in the side of a 5¼-inch disk to prevent the computer from writing data to the disk. Later disks, such as the 3½-inch disk, had a built-in slideable plastic tab to implement write-protection.Tandon introduced a double-sided drive in 1978, doubling the capacity, and a new "double density" format increased it again, to 360 KB.

For most of the 1970s and 1980s the floppy drive was the primary storage device for microcomputers. Since these micros had no hard drive, the OS was usually booted from one floppy disk, which was then removed and replaced by another one containing the application. Some machines using two disk drives (or one dual drive) allowed the user to leave the OS disk in place and simply change the application disks as needed. In the early 1980s, "quad density" 96 track-per-inch drives appeared, increasing the capacity to 720 KB.

Despite the available capacity of the disks, support on the most popular operating system of the early 80s—PC-DOS and MS-DOS—lagged slightly behind. In fact, the original IBM PC did not include a floppy drive at all as standard equipment—you could either buy the optional 5¼-inch floppy drive or rely upon the cassette port. With version 1.0 of DOS (1981) only single sided 160 KB floppies were supported. Version 1.1 the next year saw support expand to double-sided, 320 KB disks. Finally in 1983 DOS 2.0 supported 9 sectors per track rather than 8, providing 180 KB on a (formatted) single-sided disk and 360 KB on a double-sided. Along with this change came support for different directories on the disk (now commonly called folders), which came in handy when organizing the greater number of files possible in this increased space.

In 1984, along with the IBM PC/AT, the high density disk appeared, which used 96 tracks per inch combined with a higher density magnetic media to provide 1,200 KB of storage. Since the usual (very expensive) hard disk held 10–20 megabytes at the time, this was considered quite spacious.

By the end of the 1980s, the 5¼-inch disks had been superseded by the 3½-inch disks. Though 5¼-inch drives were still available, as were disks, they faded in popularity as the 1990s began. The main community of users was primarily those who still owned '80s legacy machines (PCs running MS-DOS or home computers) that had no 3½-inch drive; the advent of Windows 95 (not even sold in stores in a 5¼-inch version; a coupon had to be obtained and mailed in) and subsequent phaseout of standalone MS-DOS with version 6.22 forced many of them to upgrade their hardware. On most new computers the 5¼-inch drives were optional equipment.

Throughout the early 1980s the limitations of the 5¼-inch format were starting to become clear. Originally designed to be a smaller and more practical 8-inch, the 5¼-inch system was itself too large, and as the quality of the recording media grew, the same amount of data could be placed on a smaller surface. Another problem was that the 5¼-inch disks were simply copies of the 8-inch physical format, which had never really been engineered for ease of use. The thin folded-plastic shell allowed the disk to be easily damaged through bending, and allowed dirt to get onto the disk.

A number of solutions were developed by various companies. They all shared a number of advantages over the older format, including a small form factor and a rigid case with a slideable write protect catch. The almost-universal use of the 5¼-inch format made it very difficult for any of these new formats to gain any significant market share until 1984 when Sony convinced Apple to use the 3½-inch drives in the Macintosh 128K model, effectively making the 3½-inch drive a de-facto standard.

The 3½-inch disks had, by way of their rigid case's slide-in-place metal cover, the significant advantage of being much better protected against unintended physical contact with the disk surface than 5¼-inch disks when the disk was handled outside the disk drive. The irregular, rectangular shape had the additional merit that it made it impossible to insert the disk sideways by mistake as had indeed been possible with earlier formats.

Like the 5¼-inch, the 3½-inch disk underwent an evolution of its own. When Apple introduced the Macintosh in 1984, it used single-sided 3½-inch disk drives with an advertised capacity of 400 kB. A newer and better "high-density" (HD) format was introduced in 1987.

Another advance in the oxide coatings allowed for a new "extended-density" ("ED") format at 2880 kB introduced on the second generation NeXT Computers in 1991, and on IBM PS/2 model 57 also in 1991, but by the time it was available it was already too small to be a useful advance over the HD format and never became widely used. The 3½-inch drives sold more than a decade later still use the same 1.44 MB HD format that was standardized in 1989.

Through the early 1990s a number of attempts were made by various companies to introduce newer floppy-like formats based on the now-universal 3½-inch physical format. Most of these systems provided the ability to read and write standard DD and HD disks, while at the same time introducing a much higher-capacity format as well. There were a number of times where it was felt that the existing floppy was just about to be replaced by one of these newer devices, but a variety of problems ensured this never took place. None of these ever reached the point where it could be assumed that every current PC would have one, and they have now largely been replaced by CD and DVD burners and USB flash drives.

Apple dropped floppy drives about five years ago. Dell has made the floppy drive an option, not a standard. Other PC makers have dropped the flop, too. (info from Wikipedia and PC World, pictures from oldcomputers.net)
Posted by Michael N. Marcus at 5:02 AM