1858: first use of fingerprints for identification 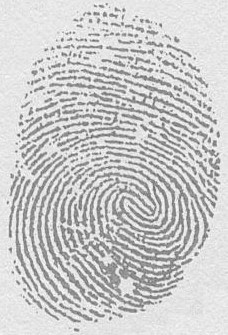 In 1858, Sir William Herschel, Chief Magistrate of the Hooghly district in Jungipoor, India, first used fingerprints on contracts. On a whim, and with no thought toward personal identification, Herschel had Rajyadhar Konai, a local businessman, impress his hand print on the back of a contract.

The idea was merely "...to frighten [him] out of all thought of repudiating his signature." Konai was suitably impressed, and Herschel made a habit of requiring palm prints -- and later, simply prints of the right index and middle fingers -- on every contract. Personal contact with the document, they believed, made the contract more binding than if they simply signed it. The first wide-scale, modern-day use of fingerprints was predicated, not upon scientific evidence, but upon superstition.

As his fingerprint collection grew, Herschel began to note that the inked impressions could prove or disprove identity. His conviction that all fingerprints were unique to the individual, as well as permanent throughout that individual's life, inspired him to expand their use.

During the 1870's, Dr. Henry Faulds, the British Surgeon-Superintendent of Tsukiji Hospital in Japan, took up the study of "skin-furrows" after noticing finger marks on specimens of ancient pottery. In 1880, Faulds forwarded an explanation of his classification system and a sample of the forms he had designed for recording inked impressions, to Sir Charles Darwin. Darwin, in advanced age and ill health, informed Faulds that he could be of no assistance, but promised to pass the materials on to his cousin, Francis Galton.

Also in 1880, Faulds published an article where he discussed fingerprints as a means of personal identification, and the use of printers' ink as a method for obtaining such fingerprints. He is also credited with the first fingerprint identification of a greasy fingerprint left on an alcohol bottle.

In 1882, Gilbert Thompson of the US Geological Survey in New Mexico, used his own fingerprints on a document to prevent forgery. This is the first known use of fingerprints in the United States.

Sir Francis Galton, a British anthropologist and a cousin of Charles Darwin, began his observations of fingerprints as a means of identification in the 1880's. In 1892, he published his book, Fingerprints, establishing the individuality and permanence of fingerprints. The book included the first classification system for fingerprints.

In 1891, Juan Vucetich, an Argentine Police Official, began the first fingerprint files based on Galton pattern types. In 1892, Vucetich made the first criminal fingerprint identification. He was able to identify a woman who had murdered her two sons, and cut her own throat in an attempt to place blame on someone else. Her bloody print was left on a door post, proving her identity as the murderer.

In 1924, Congress established the Identification Division of the FBI. By 1946, the FBI had processed 100 million fingerprint cards in manually maintained files; and by 1971, 200 million cards. With the introduction of AFIS (Automated Fingerprint Identification System), the files were split into computerized criminal files and manually maintained civil files. Many of the manual files were duplicates, so the records actually represented about 25 million criminals, and an unknown number of people in the civil files. (info from AlladinUSA.com)
Posted by Michael N. Marcus at 4:50 AM