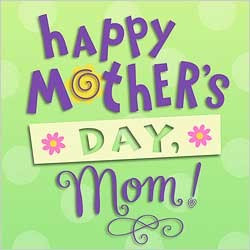 Next Sunday, May 13, Mothers' Day will be celebrated in the US and Canada; and the holiday is celebrated on other days in other countries. According to the National Restaurant Association, Mothers' Day is the most popular day to dine out. In some parts of the United States, Mothers Day marks the beginning of the tomato planting season.

Contrary to common opinion, the holiday was not invented by the Hallmark Card company. Mothers Day goes back to an ancient Greek spring festival dedicated to Rhea, mother of many deities of Greek mythology.

Ancient Romans celebrated a spring festival called Hilaria, dedicated to Cybele, a mother goddess, starting around 250 BCE. Hilaria lasted for three days in mid-March and included parades, games and masquerades. The celebrations were so raucous that followers of Cybele were banished from Rome.

Early Christians celebrated a Mother's Day of sorts on the fourth Sunday of Lent in honor of the Virgin Mary. In England the holiday was expanded to include all mothers, and called Mothering Sunday.

The American Mothers Day was copied from England by Julia Ward Howe, an activist, writer and poet famous for her Civil War song, Battle Hymn of the Republic.

Howe suggested that June 2 be annually celebrated as Mothers Day, and be dedicated to peace. In 1870, she wrote her famous Mothers Day Proclamation, a passionate appeal to women to oppose war. She also initiated a Mothers' Peace Day observance on the second Sunday in June in Boston and held the meeting for a number of years. Howe tirelessly championed the cause of official celebration of Mothers Day and declaration of official holiday on the day, but failed in her attempt to get formal recognition of a Mothers' Day for Peace.

Anna Jarvis never married or had children, but is known as the Mother of Mothers Day.

Anna Jarvis got the inspiration of celebrating Mothers Day from her mother Anna Marie Reeves Jarvis. An activist and social worker, Mom Jarvis hoped that someday someone would honor all mothers, living and dead, and pay tribute to their contributions.

Anna never forgot her mother’s words and when her mother died in 1905, she resolved to fulfill her mother’s desire of having a mothers day. Initially, Anna supplied Carnations for a church service in West Virginia to honor her mother, who favored that flower. Later Anna and her supporters lobbied for the official declaration of Mothers Day holiday. By 1911, Mother's Day was celebrated in almost every state, and in 1914 President Woodrow Wilson signed a Joint Resolution designating the second Sunday in May as Mothers Day, a day for American citizens to show the flag in honor of mothers whose sons had died in war.

Just nine years after the first official Mothers Day holiday, commercialization became so rampant that Anna Jarvis herself became a major opponent of what the holiday had become. Mothers Day is now one of the most commercially successful US holidays. (info from mothersdaycelebration.com and Wikipedia)
Posted by Michael N. Marcus at 4:51 AM