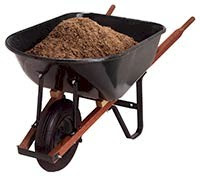 Apparently the wheelbarrow was not invented by some anonymous caveman, but was invented in China in the year 200, by army general Chuko Liang.

Liang's wheelbarrows were used to transport supplies and injured soldiers, and had two wheels and required two men to propel and steer. (info from "Imaginative Inventions" and About.com)
Posted by Michael N. Marcus at 5:48 AM