1931: last Rolls-Royce made in the United States 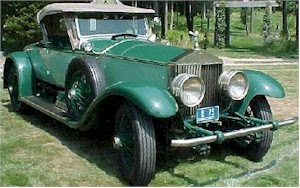 In 1884, a self-taught engineer named Henry Royce established a small business in Britain with only 70 pounds (about $100). Initially Royce produced only electrical motors and generators, but eventually built a car in 1904. That same year, Royce met London car dealer Charles Rolls.

At their first meeting, Royce took Rolls for a spin in the car. Legend has it that as he climbed aboard, Rolls asked Royce to “start her up.” Royce replied, “My dear fellow, she’s already running!” Soon after, they reached an agreement that Royce Limited would manufacture cars to be sold exclusively by CS Rolls & Company. The success of these Rolls-Royce cars led to the formation of the Rolls-Royce Company in 1906.

The charter included a provision that the company should produce engines for use “on land or water or in the air.” That same year, Rolls-Royce launched the Silver Ghost, hailed as “the best car in the world,” and opened its first US sales office in New York City.

Meanwhile, Charles Rolls had been introduced to the Wright brothers and become passionate about flight. Until his untimely death in a 1910 plane crash, Rolls worked hard to persuade his partner to venture into the aviation business. Royce preferred cars.

In 1919, Rolls-Royce recognized that the US was the most important car market in the world. Americans bought more cars each year than the rest of the world combined. A factory was built in Springfield, Massachusetts and the first chassis was completed in 1921. By 1923, Rolls-Royce presence in the US was substantial, with offices around the country.

Rolls-Royce of America manufactured nearly 3000 Silver Ghosts and Phantoms before succumbing to the Depression in 1931. To this day, Springfield is the only place outside England that Rolls-Royce cars have ever been built. (info from Rolls-Royce; photo from classic-british-cars.com)
Posted by Michael N. Marcus at 4:31 AM