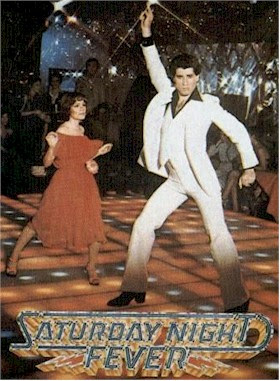 Saturday Night Fever starred John Travolta as Tony Manero, a troubled Brooklyn youth whose weekend activities are dominated by visits to a Brooklyn discotheque. While in the disco, Tony is the king, and the disco helps him to temporarily forget the reality of his life: a dead-end job, clashes with his unsupportive and squabbling parents, racial tensions in the local community, and dead-beat friends.

The movie significantly helped to popularize disco music around the world, and made Travolta a household name. The Saturday Night Fever soundtrack, featuring disco songs by the Bee Gees, became the best selling soundtrack ever.

The film also showcased aspects of the music, the dancing, and the subculture surrounding the disco era: symphony-orchestrated melodies, haute-couture styles of clothing, sexual promiscuity, and graceful choreography.

The story is based upon a 1976 New York magazine article by British writer Nik Cohn, "Tribal Rites of the New Saturday Night." In the late-1990s, Cohn acknowledged that the article had been fabricated. A newcomer to the United States and a stranger to the disco lifestyle, Cohn was unable to make any sense of the subculture he had been assigned to write about. The characters who were to become Tony Manero and his friends sprang almost completely from his imagination.

The film is also notable for being one of the first instances of cross media marketing, with the tie-in soundtrack's single being used to help promote the film before its release and the film popularizing the entire soundtrack after its release.
The story of the film has Tony Manero connect with the aloof Stephanie (Karen Lynn Gorney) one night at the disco. Despite her initial frosty and superior attitude toward Tony, she agrees to partner with him in the dance contest after much urging. Tony had previously agreed to dance with Annette, who had actively pursued Tony, despite his obvious disdain for her. Stephanie has a job in Manhattan as a secretary for a magazine and is poised to move there and has more opportunities to work her way up. This awakens in Tony the need to transcend his working-class roots of Bay Ridge, Brooklyn. However, Stephanie herself ultimately reveals her own vulnerabilities.

Also examined through the film is Tony's relationship with his family, including an older brother (who appears to be his parents clear favorite child) who abandons a planned career in the priesthood.

The unsentimental depiction of the subculture of the main characters contrasts with Travolta's follow-up film, the sanitized Grease (1978).

There were two theatrically-released versions of the film: the "original" R version and the PG "edited version." The PG-rated version was released in 1978 as an attempt to attract a more youthful audience. It is shorter than the original, with profanity replaced by separately-filmed scenes that substituted milder language, and with several scenes shortened or cut. Both theatrical versions were released on VHS, but only the R-rated version was released on LaserDisc and later on DVD, and the DVD version is shown in widescreen only. The R-rated version contains scenes of profanity, nudity, drug use and a date-rape scene which has been de-emphasised or completely removed from the PG version.

A sequel, Staying Alive, was released in 1983. It starred John Travolta and was directed by Sylvester Stallone.

Saturday Night Fever was the favorite movie of the late film critic Gene Siskel, who claimed to have seen it 17 times. He liked the movie so much, he bought the famous white disco suit (worn by Travolta in the movie) at a charity auction for $17,000.

John Travolta still has the pair of high-heeled shoes he wore during the opening and dance sequences of the film (as depicted in the poster). He says he sometimes takes them out of the closet, but claims he doesn't wear them. (info from Wikipedia)
Posted by Michael N. Marcus at 4:52 AM