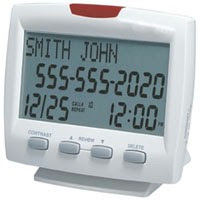 In 1982, a patent for Caller ID was filed by Carolyn Doughty of Bell Laboratories, then part of AT&T (the old AT&T, not the new one).

Initially, the operating telephone companies wanted to have the caller ID function performed by the central office as a voice announcement and charged on a per call basis. John Harris, an employee of Northern Telecom's telephone set manufacturing division in Ontario promoted the idea of having caller ID on a telephone set display.

The first market trial for caller ID and other "TouchStar" services was on July 7, 1984 in Orlando, Florida. Ellis D. Hill, the head of the BellSouth Product team, coined the term "caller ID."

In 1987, Bell Atlantic conducted another market trial in Hudson County, New Jersey, which was followed by limited deployment. BellSouth began the first commercial application of caller ID in December 1988 in Memphis, Tennessee and was the first regional Bell to fully deploy the system. Later enhancements include the providing of name with number, caller ID on call waiting, and talking caller ID.

Originally, caller ID was provided from an accessory box set up near a phone. Today, the feature is built into many phones. Some phone companies charge extra for the service, but it is usually free with cellular and broadband phone service. (some info from About.com and Wikipedia)
Posted by Michael N. Marcus at 7:23 AM