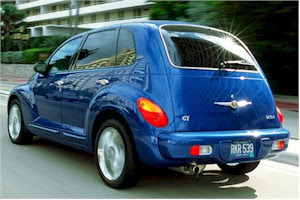 DaimlerChrysler announced today a deal to sell a controlling stake in Chrysler Group, Detroit's No. 3 auto maker, to private-equity firm Cerberus Capital Management. Daimler paid $36 billion to buy Chrysler nine years ago, and will sell about 80% of it for $7.4 billion.

The deal, in which DaimlerChrysler is effectively paying to dispose of most of Chrysler, is also a watershed in the industry, marking the first time a private-equity company has acquired one of the world's biggest auto makers.

In Greek mythology, Cerberus was a monstrous three-headed dog with a snake for a tail. Cerberus guarded the gate to hell and ensured that spirits of the dead could not leave.

DaimlerChrysler said that an affiliate of Cerberus (the company, not the monster) will acquire 80.1% in the new Chrysler Holding LLC, while DaimlerChrysler will keep a 19.9% stake. It said that obligations for pensions and health-care costs would be retained by the Chrysler companies.

The affiliate will make a capital contribution of $7.4 billion in return for the 80.1% equity interest in the future new company. Due to the new corporate structure, the name of DaimlerChrysler AG is to be changed to Daimler AG.

DaimlerChrysler said the deal is still subject to the approval of its supervisory board, but has been backed by the United Autoworkers Union. The closing of the transaction is expected to take place in the third quarter of 2007.

The news sent DaimlerChrysler shares up 5.4% in morning trade in Frankfurt. Shares extended a nearly 30% rise going into Monday on anticipation of such a deal.

A private-equity takeover of Chrysler marks a watershed for the industry, which is struggling under the weight of massive pension and health-care obligations to its union workers. Those debts and the cash required to fund them have hobbled General Motors Corp., Ford Motor Co. and Chrysler in the face of relentless competition from Asian and European rivals. Chrysler has estimated that Japanese auto makers like Toyota Motor Corp. enjoy a labor-cost advantage of as much as $30 an hour.

Cerberus has a record of slashing costs at operations it acquires, and some analysts say a Cerberus-owned Chrysler could move much more aggressively to cut labor costs, prune Chrysler's crowded dealer network in the U.S. and shift investment to developing markets overseas. But any final deal for Chrysler also hinges on what happens this summer, when the United Auto Workers kicks off negotiations for new contracts with all three Detroit auto makers.

The proposed sale would mark the end of DaimlerChrysler's turbulent nine-year effort to make a success of an ambitious global expansion strategy pushed by former Chairman and Chief Executive Officer Jürgen Schrempp. Mr. Schrempp rocked the auto industry in 1998 with his deal to buy Chrysler, which at the time was at a high point in its profit and product cycle.

Billed at the time as a "merger of equals," the deal never delivered the synergies that Mr. Schrempp and his successor, Dieter Zetsche, argued it could. Instead, Chrysler's performance seesawed from losses to profits to, most recently, losses again. For 2006, Chrysler Group had a loss of $633.3 million on revenue of $63.6 billion. (info from The Wall Street Journal and Wikipedia)
Posted by Michael N. Marcus at 5:52 AM