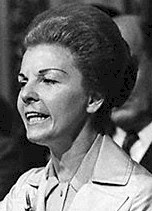 María Estela Martínez Cartas was born in Argentina in 1931. She became a nightclub dancer in the early 1950s, adopting a non-Spanish variant of her saint's name, Isabela, or Isabel, as her stage name. She met her future husband Juan Domingo Perón during his exile in Panama. Perón, who was 35 years her senior, was attracted to her beauty and believed she could provide him with the female companionship he had been lacking since the death of his second wife, Eva ("Evita"). Isabel soon gave up her career in show business and became Perón's personal secretary.

Perón brought Isabel with him when he moved to Spain, in 1960. Authorities in the Roman Catholic nation did not approve of Perón's living arrangements with this young woman, so in 1961 the former president reluctantly got married for a third time.

As Perón began to return to an active role in Argentine politics, Isabel would often be used as a go-between from Spain to South America. Having been deposed in a coup years prior, Perón was forbidden from returning to Argentina, so his new wife would travel for him and report back to him.

It was also around this time that Isabel met José López Rega, an occult "philosopher" and fortune teller, and also founder of the Argentine Anticommunist Alliance, a death squad which later killed 1,500 under Isabel's Presidency. Isabel was quite interested in the occult, and the two quickly became friends. Under pressure from Isabel, Perón appointed López as his personal secretary.

Héctor Cámpora was nominated by Perón's Justicialist Party to run in the 1973 presidential elections, and won. However, it was generally understood that Perón held the real power. Later that year, Perón was persuaded to return to Argentina. Cámpora resigned to allow Perón to run for president.

In a surprisingly uncontroversial move, he chose Isabel as his running mate. Perón's return from exile was marked by a growing rift between the right and left wings of the Peronist movement. Cámpora represented the left wing, while López Rega represented the right wing. Under López Rega's influence, Juan and Isabel Perón favored the right wing. Isabel had very little in the way of political experience or ambitions, and she was a very different personality from Evita, who was more into politics and who had been denied the post of vice president years earlier.

Juan Perón died on July 1, 1974, less than a year after his third election to the presidency. Isabel assumed the position and became the first non-royal female head of state and head of government in the West.

Unlike Evita, who was almost a demigoddess in Argentina, Isabel was very unpopular. One factor was that López Rega, by this time minister of social welfare, had so much influence over Isabel that he was a de facto prime minister. Despite his right-wing views, his status as the power behind the throne greatly frightened the military. Rodolfo Almirón, arrested in 2006 in Spain, was in charge of López Rega's and Isabel Perón's personal security.

Isabel agreed to fire López, but the military concluded that with the prevailing climate of widespread strikes and political terrorism, a "weak-willed and inexperienced woman" would not be a suitable President. Her time in power resulted in a spike in the inflationary rate and this did not help her case.

On March 24, 1976, she was deposed in a bloodless coup. After remaining under house arrest for five years, she was sent into exile in Spain in 1981, and returned briefly to Argentina in 1984, shortly after democracy was restored. (info from Wikipedia and terra.es)
Posted by Michael N. Marcus at 5:37 AM