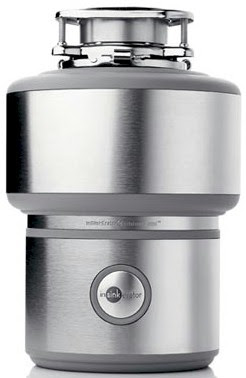 The garbage disposer (or disposal) was invented in 1927 by John W. Hammes, an architect in Racine, Wisconsin. After eleven years of development, his In-Sink-Erator company put the invention on the market.

Many US cities and towns had regulations against putting food waste (garbage) into the sewer system. In-Sink-Erator spent considerable effort, and convinced many localities to rescind the prohibitions. Eventually, many localities even mandated the use of disposals. New York City banned their use until 1997.

The device first became widely popular in upscale American kitchens of the 1970s and 1980s, yet remains very rare in European countries, due in part to greater promotion of composting kitchen waste and regulations on sewage disposal.

A garbarge disposal is featured in 1981's The Incredible Shrinking Woman when Lily Tomlin's character "Pat Kramer" falls down the drain and is almost chopped to bits by her family.

The character of Claire Bennet on the NBC TV series Heroes severely (and intentionally) injures her hand in an active garbage disposal unit in the series pilot aired in 2006. This led to a lawsuit by InSinkErator, the manufacturer of the unit.

Claire is a cheerleader with the power of indestructibility, who sticks her hand into a garbage disposal and gets it mangled. A few seconds later her hand heals.

In the lawsuit, the appliance maker claims that NBC used the InSinkErator trademark without the company's consent, that the show "implies an incorrect and dangerous design for a food waste disposer" and that NBC's depiction of the InSinkErator "casts the disposer in an unsavory light, irreparably tarnishing the product."

Dan Callahan, spokesman for InSinkErator parent Emerson Electric, said the company, of course, does not recommend anybody put their hands in a garbage disposal that is turned on. He also pointed out that, according to data from the Consumer Products Safety Commission, you are actually ten times more likely to get injured by your dishwasher than your garbage disposal.

An NBC spokesperson stated, "While we do not believe there is any legal issue with the episode as originally broadcast, we nonetheless have decided to edit the episode for future uses." NBC is owned by GE, which also makes garbage disposers. Apparently they did not want to show their own brand chomping on human body parts. (info from Wikipedia and CNNMoney.com)
Posted by Michael N. Marcus at 5:20 AM

So, which is better for chopping off fingers: GE or InSinkErator?