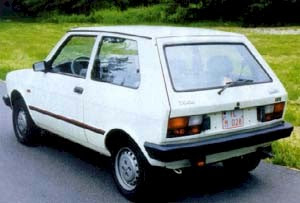 Introduced in the summer of 1986 at a price of less than $4000, the Yugoslavian-made Yugo was by far the lowest-priced new car available in the US at the time, and it sold very well at first. But by the early 1990s, the effects of United Nations sanctions on Yugoslavia forced manufacturer Zastava to withdraw the car from the US market.

American-sold Yugos were based on the Fiat 127, under licence from Fiat. The Yugo was imported by Malcolm Bricklin, who had previously imported the Subaru, and wanted to introduce a simple, low cost car to the US. The name is a pun on "You Go."

In the US, the Yugo developed a reputation for bad quality and low power, and was frequently the butt of jokes. Defenders of the brand argued that Detroit car makers were collaborating with influential automotive media to eliminate low-priced competition.

At first, four models were sold in the United States: the basic entry-level $3,990 GV (for "Great Value"), the nearly-identical GVL and GVS with minor trim and upholstery upgrades, and the race-inspired GVX with the 1300 cc engine, five-speed manual transmission and standard equipment including a plush interior, ground-effects package, alloy wheels and rally lights. The Cabrio convertible was introduced in 1988.

Wide familiarity with the Fiat 127's prowess as an autocross racer meant that many Yugo GVs were modified with Abarth racing parts and sent to participate in SCCA-sanctioned events.

The Yugo was marketed as a car for everyone, providing basic economical and reliable transportation like the Volkswagen Beetle and the earlier Ford Model T. The car was promoted as a uniquely affordable new vehicle - providing an option for buyers who would otherwise have chosen a used vehicle - and as a reliable second car for wealthier buyers. (info from Wikipedia)
Posted by Michael N. Marcus at 4:30 AM

I still have a 1988 YUGO GVX and it gets allot of looks at the local car shows.