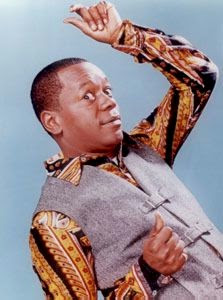 Flip Wilson was among a group of rising black comics of the early 1970s, of such notoriety as Bill Cosby, Nipsey Russell and Dick Gregory. He is best remembered as the host of The Flip Wilson Show, the first variety show bearing the name of its African-American host, and for his role in renewing stereotype comedy.

With a keen wit developed during his impoverished youth, Wilson rose quickly to fame as a stand-up comic and television show host. Under the stagename Flip, inherited from Air Force pals who joked he was "flipped out," Wilson began performing in cheap clubs across the United States. His early routines featured black stereotypes of the controversial Amos 'n' Andy-type. After performing in hallmark black clubs such as the Apollo in Harlem and the Regal in Chicago, Wilson made a successful appearance on the Ed Sullivan Show. Recommended by Redd Foxx, Wilson also performed on The Tonight Show to great accolades, becoming a substitute host.

After making television guest appearances on such shows as Love, American Style and That's Life, and starring in his own 1969 NBC special, Wilson was offered an hour-long prime-time NBC show, The Flip Wilson Show, which saw a remarkable, four-year run. Only Sammy Davis Jr. had enjoyed similar success with his song and dance variety show; comparatively, shows hosted by Nat "King" Cole and Bill Cosby were quickly canceled, due to lack of sponsorship and narrow appeal. At the show's high point, advertising rates swelled to $86,000 per minute, and by 1972, The Flip Wilson Show was rated the most popular variety show, and the second most popular show overall in the United States.

Wilson's television success came from his unique combination of "new" stereotype comedy and his signature stand-up form. His style combined deadpan delivery and dialect borrowed from his role models, Redd Foxx and Bill Cosby, but replaced their humorous puns with storytelling. His fluid body language, likened to that of silent screen actor Charlie Chaplin, gave Wilson's act a dynamic and graceful air. The show benefited from his intensive production efforts, unprecedented for a black television performer; he wrote one third of the show's material, heavily edited the work of writers, and demanded a five-day workweek from his staff and guests to produce each one-hour segment. Audiences appreciated the show's innovative style risks, such as the intimate theater-in-the-round studio, and medium-long shots which replaced close-ups, to fully capture Wilson's expressive movements.

Wilson altered his club act for television to accomodate family viewing, relying on descriptive portraits of black characters and situations, rather than ridicule. Still, his show offended many African-Americans and civil rights activists who believed Wilson's humor depended on race. A large black and white television audience, however, found universal humor in the routines, and others credited Wilson with subtly ridiculing the art of stereotyping itself. Wilson, however, denied this claim, strongly denouncing suggestions that his race required that his art purport anti-bias messages.

These divergent interpretations in fact reflect the variety and difference among Wilson's characters. Some were easily offensive, such as the money laundering Reverend Leroy and the smooth swinger, Freddy the Playboy. Others, such as Sonny, White House janitor and the "wisest man in Washington", were positive black portraits. The show's most popular character, Geraldine, exemplifies Wilson's intention to produce race-free comedy. Perfectly coifed and decked out in designer clothes and chartreuse stockings, Geraldine demanded respect and, in Wilson's words, "Everybody knows she don't take no stuff." Liberated, yet married, outspoken, yet feminine, ghetto-born yet poised, Geraldine was neither floozy nor threat. This colorful black female image struck a positive chord with viewers; her one-liners -- "The devil made me do it," and "When you're hot, you're hot" -- became national fads.

Social messages were imparted indirectly through Wilson's characters; Geraldine, for example, countered the female-degrading acts of other popular stand-up comics. Through Geraldine, Wilson also negotiated race and class bias by positively characterizing a working class black female, in contrast to the absence of female black images on 1970s television, with the exception of the middle-class black nurse of the 1969 sitcom Julia.

Wilson's humor was at the same time insightful, self-effacing and often intellectual. One of his best jokes (the retelling of a very old joke) was relayed as follows: "Lots of crazy things happen in traveling. Just last week I was on a train. There was a woman traveling with a baby. UGLY baby! I mean, I'm not one to make comments about anyone's kid -- but this was an UGLY baby. A guy walks down the train -- he's half smashed -- and he stops. And he stares. And the lady says "What are you looking at?" The guy says "I'm looking at that ugly baby." A scene ensues, whereupon the conductor arrives. He says "What's going on here?" The woman says "This man just insulted me!" The conductor says "Now calm down Madam, calm down. We here at the railroad want to make sure that there are no altercations between our passengers and that everyone's trip is as relaxing as possible. Accordingly, if you allow us, please step into the dining car and the railroad will buy you a free meal. And maybe we can find a banana for your monkey."

In his stand-up comedy routine "Columbus," Wilson re-tells the story of Christopher Columbus from a slightly 'urban' perspective, with Columbus finally convincing the Spanish monarchs to fund his voyage by noting that discovering America means that he can thus also discover Ray Charles. Hearing this, Queen Isabella, sounding not unlike "Geraldine," says that "Chris" can have "all the money you want, Honey -- You go find Ray Charles!!" When Columbus departs from the dock, Isabella is there, testifying to one and all that "Chris gonna find Ray Charles!!"

Wilson's career lost momentum when his show was canceled in 1974. Though the recipient of a 1970 Emmy Award for outstanding writing and a 1971 Grammy for best comedy record, Wilson's career never rekindled. He continued to make television specials, and TV guest appearances, debuted in Sydney Poitier's successful, post-blaxploitation film, Uptown Saturday Night, and performed in two subsequent unsuccessful films. His 1985 television comeback, Charlie and Company -- a sitcom following The Cosby Show's formula--had a short run.

Wilson saw himself first as an artist, hence, humor was more prominent than politics in his comic routines. This style, however, allowed him to successfully impart occassional social messages into his act. Moreover, he achieved unprecedented artistic control of his show, pressing the parameters for black television perfomers and producers. Through Geraldine, Wilson created one of a few respectful television images for black woman, who were generally marginalized by both the civil rights and women's movements of that era. Finally, though no regular black variety show took up where Wilson left off, its success paved the way for the popularity of later sitcoms featuring middle- and working-class black families, situations, and dialect, shows such as Sanford and Son, The Jeffersons and Good Times. Wilson died of cancer at the age of 64, in 1998.(Info from The Museum of Broadcast Communications, and Wikipedia)
Posted by Michael N. Marcus at 4:45 AM