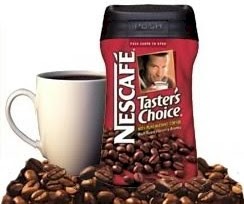 The first mass-produced instant coffee, was the invention of George Constant Washington, an English chemist living in Guatemala.

While waiting for his wife to join him for coffee, he noticed on the spout of the silver coffee pot, a fine powder, which seemed to be the condensation of the coffee vapors. This intrigued him and led to his discovery of soluble coffee. In 1906 he started experiments and put Red E Coffee on the market in 1909.

In 1938, Nestlé invented freeze-dried coffee after being asked by Brazil to help find a solution to their coffee surpluses. Nescafe was first sold Switzerland, where the company is based.

Instant coffee really took off in the mid-1950s when television watching became widespread. Commercial breaks were too short to brew a cup of tea, but long enough for instant coffee. Coffee giants like Nestlé and General Foods realized this was a big opportunity and advertised their instant coffee during the breaks. Tea companies introduced the tea bag to compete. (info from About.com)
Posted by Michael N. Marcus at 4:53 AM