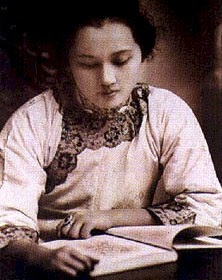 Soong Ch'ing-ling (1893 – 1981), also known as Madame Sun Yat-sen, was one of three sisters whose husbands were among China's most significant political figures of the early 20th century.

She was the daughter of a wealthy businessman and missionary, and graduated from Wesleyan College in the US. Ching-ling married Sun Yat-sen, who had previously been married. Her parents greatly opposed the match, as Dr. Sun was 26 years her senior. After Sun's death in 1925, she was elected to the Kuomintang Central Executive Committee in 1926.

In 1939, she founded the China Defense League, which later became the China Welfare Institute. The committee worked for peace and justice, and now focuses on maternal and pediatric healthcare, preschool education, and other children's issues.

In the early 1950s, she founded the magazine China Reconstructs, with the help of Israel Epstein. This magazine is published monthly in six languages.

After the establishment of the People's Republic of China, she became the Vice President ("Vice Chair"), Head of the Sino-Soviet Friendship Association and Honorary President of the All-China Women's Federation. In 1951 she was awarded the Stalin Peace Prize (called the "Lenin Peace Prize" after destalinization), and in 1953 a collection of her writings was published. From 1968 to 1972 she acted jointly with Dong Biwu as head of state.

On May 16, 1981, two weeks before her death, she was admitted to the Communist Party and was named Honorary President of the People's Republic of China. She is the only person ever to hold this title. (info from Wikipedia and terra.es)
Posted by Michael N. Marcus at 6:32 AM