2008: first time Democrats gather in Chicago without being attacked by police 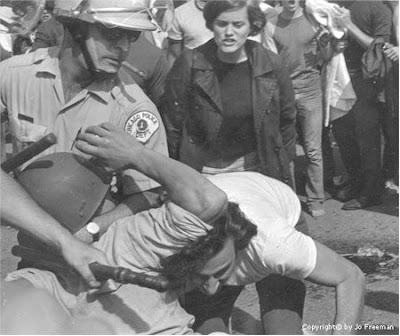 During the 1968 Democratic convention in Chicago, a peace rally in Grant Park ended when the police clubbed a teenager who was lowering an American flag, and others who tried to protect him.

Mayor Richard Daley called out 7,500 members of the Illinois National Guard to reinforce 12,000 police officers. They tried to remove everyone -- mostly party volunteers, candidate supporters and tourists -- from Michigan Avenue in front of the Hilton hotel, which was the convention headquarters. While the nominating speeches were being given at the amphitheater several miles away, people were pushed through plate glass windows when caught between Guard and police as they dispersed the crowd.

An official report later described the event as a "police riot."

In 2008, an estimated 120,000 supporters of Barak Obama gathered at the same park to await election results and cheer the president-elect. The cops didn't beat up anyone this time. (info & photo from JoFreeman.com)
Posted by Michael N. Marcus at 5:45 AM