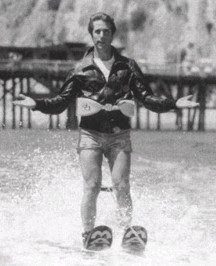 Mad TV reenacted a skit in which the infamous "jump the shark" episode was partially redone in mock Spanish, featuring dialogue such as Laverne saying "Aww, Shirl, Fonzie es jumpo el sharko!" (info from Wikipedia)
Posted by Michael N. Marcus at 1:28 AM

I recently came across your blog and have been reading along. I thought I would leave my first comment. I don't know what to say except that I have enjoyed reading. Nice blog. I will keep visiting this blog very often.