1961: first TV news stand-up in front of the White House 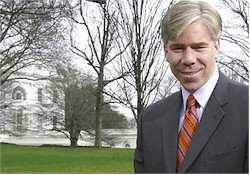 A television reporter standing in front of the White House is a familiar image, and the location is used almost every day.

In the early 1960s, television crews filmed reports inside the press briefing room, said Bob Asman, who worked for NBC News for 32 years. Not long after he arrived at the White House in 1961, someone at NBC had the idea to move outside.

"We found a spot near a tree on the North Lawn," Bob said. "It gives you a beautiful shot of the North Portico, which is a good shot day or night."

The other networks followed suit. Over time, however, the weight of all those journalists and their equipment started to damage the tree's roots and the press corps was asked to move a little west, to the other side of a driveway.

Here, the problem was mud. During the Monica Lewinsky saga, some camera operators wore boots to keep from sinking into the mire. The area was neatened up with crushed bluestone, prompting the nickname Pebble Beach. In 2002, the Park Service upgraded the area with paving stones, inspiring a new nickname: "Stonehenge."

Craig Allen, a University of Arizona journalism professor, is fed up with the clichéd White House stand-up. "The stand-up gives the impression that reporters are there ceaselessly digging out news when in reality they're there to get the next news release, pretty much," he said. "They have no access to the president."

Additionally, Craig thinks the North Lawn stand-ups can damage the reputation of US journalists abroad.

"You can imagine when [foreign viewers] tune into CNN and see the CNN correspondent standing in front of the White House, what the effect of that is," he said. "It makes it look like the reporter is a shill for the US government and is basically touting the party line. . . . It looks like the networks are part of the government and are espousing what the government wants as news." (info & photo from The Washington Post)
Posted by Michael N. Marcus at 5:46 AM