1898: first use of hospital ship during wartime 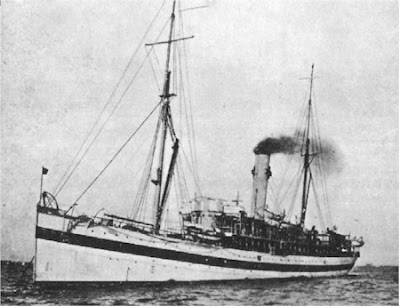 In 1898, during the Spanish-American war, the US was the first country to dispatch a specialized hospital ship into a battle zone.

The hospital ship Solace remained with the battleships that were sent to Key West and Cuba. Solace was equipped and manned to care for sick or wounded sailors and soldiers.

Originally constructed in 1896 as the Creole for the Cromwell Steamship Lines, the vessel was acquired in 1898 by the Navy. Within 16 days, she was renamed Solace and fitted out as an "ambulance ship," complete with a large operating room, steam disinfecting apparatus, ice machine, steam laundry plant, cold storage rooms, and an elevator.

She could accommodate two hundred patients in her berths, swinging cots and staterooms. Her hurricane deck was enclosed with canvas to be used as a contagious disease ward. The vessel's fresh water tanks held 37,000 gallons of fresh water, and her system of evaporators and distillers maintained the supply.

She was given gifts of supplies and equipment from groups such as the Rhode Island Sanitary and Relief Association and the National Society of Colonial Dames, gaining an X-ray machine, a carbonating machine, etc.

Solace's crew included a surgeon, three assistant surgeons, three hospital stewards (one of which was a skilled embalmer) eight trained nurses, a cook, four messmen and two laundrymen. The ship and her crew had "the honor of inaugurating antiseptic surgery at sea.

The vessel was commissioned on April 14, 1898 and placed under the command of Commander A. Dunlap. Her first trip took her out to the Cuban and Puerto Rican blockading squadrons where she collected the few men wounded in the bombardment of San Juan, and other sick or wounded among the fleet.

On June 5, she arrived in New York with 57 sick and wounded men. She returned to the vicinity of Cuba in time take aboard the Marines wounded in the capture of Guantanamo, and then many Spanish wounded who had been taken aboard the Brooklyn after the Spanish loss in the naval Battle of Santiago. She also took aboard an additional 44 army personnel at Siboney. On July 16, she landed the 44 army personnel, 48 wounded Spanish navymen and an additional 55 sick navymen at Hampton Roads, Virginia.

After being resupplied and outfitted with an additional ice machine in New York, she again steamed south to the war zone. She picked up the navy sick from the waters aroound Cuba and those injured and wounded brought by the Gloucester from Puerto Rico. After transporting these men to Boston, she underwent some repairs and then went back to Cuban waters.

By now it was September and the fighting was over, but the need for Solace was greater than ever. With the outbreak of yellow fever and malaria among the troops in Cuba, the situation was quite grave. Solace was under orders bring home as many of the sick as she could accommodate.

In February of 1899, she steamed for California, going by way of Europe, the Middle East, Far East, and Hawaii, reaching Mare Island on May 27, where she was overhauled. From July of 1899 until October of 1905, she sailed the Pacific, carrying mail, passengers and provisions. In 1905 Solace was decommissioned at Mare Island.

Recommissioned on June 3, 1908, the vessel traveled in the Pacific, before steaming to Charleston, South Carolina to be decommissioned again on April 14, 1909. Recommissioned the following November, she served off the east coast of the US for the remainder of her career, with the single exception being a 1913 trip to France.

On Jannuary 1, 1919. the vessel aided in rescuing the crew of the Northern Pacific off Fire Island, New York, which was returning from Europe with wounded World War One veterans. Despite heavy seas, after several days the Solace removed 504 men and took them to safety at Hoboken, New Jesey.

The ship was 377 feet long, 44 feet wide, had a crew of 270, and one 3200 HP engine. It was unarmed and was the first US Naval vessel to be fitted out to the requirements of the Geneva Convention and to fly the Red Cross flag. Other countries including England and Italy, followed the American example and used hospital ships in other wars.

Solace was sold for scrapping to Boston Metals Co. in Baltimore in November, 1930. (info from The New York Times, Spanamwar.com and the US Navy.)
Posted by Michael N. Marcus at 2:53 AM