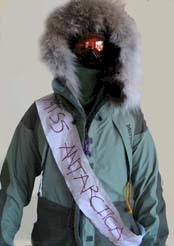 Adventurer Alison Levine has become the first American to follow a remote route to the geographic South Pole pioneered by Italian explorer Reinhold Messner. Levine left in early December 2007 for the Ronne Ice Shelf in west Antarctica and finished the arduous 574-mile journey in just 38 days. Since Messner's expedition in 1989, only two Norwegian teams had completed this route - until Levine's trek.

Levine endured some of the harshest conditions known to man including -50 degree F temperatures, icy winds and dangerous crevasse fields covered with snow bridges that have been known to collapse under pressure. The extreme weather made the trip especially hard for Levine because she suffers from Raynaud's Disease, a neurological
disorder that affects her extremities in cold weather. As a result, she often lost the use of her hands and was forced to ski without poles because she could not grip the handles. In addition, she was born with Wolff-Parkinson-White Syndrome, a life-threatening heart condition and had two surgeries to correct the problem.

"Antarctica definitely showed us her teeth," said Levine. "The wind and the cold really beat us up at times. My hands would freeze whenever I stopped for a short break which meant I would have to ski and haul all of my gear without using my poles, and that was pretty tough. In these kinds of situations, you have to keep pushing day after day. You have no choice. It's not like you can just pop into a ski lodge for a cup of hot cocoa. There is no escape. It's just you against the elements - but that's how I like it."

At 5'4, 112-pounds, Levine skied 10 hours a day with a sled containing 150 pounds of her own gear and supplies harnessed to her waist. Despite eating 5,000-6,000 calories a day, Levine lost 15 percent of her body weight due to the physical demands of the journey.

Levine retraced Messner's traverse to the South Pole as part of an international five-person team that included an Australian, who led the group along with adventurers from Canada, Norway and Holland. A record of her blog and pictures is here.

Alison Levine has climbed peaks on every continent, served as team captain of the first American Women's Everest Expedition and skied across the Arctic Circle to the geographic North Pole. She founded Daredevil Strategies, a consulting firm specializing in organizational effectiveness, leadership development and team dynamics. Levine is also the founder of the Climb High Foundation, a nonprofit organization that helps women in western Uganda.

Levine earned her MBA from Duke University. During her 20-year business career, she held positions in healthcare, technology and investment banking. She is said to be the most requested female business speaker in the US.
Posted by Michael N. Marcus at 5:41 AM

What she accomplished is truly amazing and shows that the only limits are those you set on yourself.