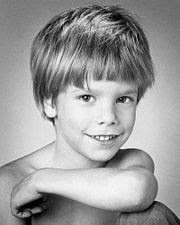 In 1983 President Ronald Reagan proclaimed May 25 as National Missing Children’s Day. Each administration since has honored this annual reminder to renew efforts to reunite missing children with their families and make child protection a national priority.

On May 25, 2006, Missing Children's Day was commemorated by the US Postal Service with the issuance of the AMBER Alert Stamp.

The date marks the anniversary of the 1979 abduction of six-year-old Etan Patz from Manhattan. Etan was the first child to be pictured on the back of a milk carton. His case remains unsolved. Etan is still categorized as missing.

On the morning of Friday, May 25, 1979, Etan left his apartment by himself -- for the first time -- to walk the two blocks to catch the school bus. He did not reach the bus stop.

When he didn't return home from school that afternoon, his mother reported him missing. An intense search, with nearly 100 police officers and a team of bloodhounds, began that evening and continued for weeks.

In 1991, jailhouse informants claimed that Jose Ramos, a convicted child sexual abuser imprisoned in Pennsylvania, admitted to his murder. Ramos had been a friend of Etan's one-time babysitter. He promised that no body would be found, saying "It's too horrible. No one would ever represent me". The New York Post reported on October 23, 1999, that Ramos was the prime suspect in Etan's disappearance.

Etan was declared legally dead in 2001. His parents, Stanley and Julie Patz, pursued a civil case against Ramos, who was found liable for Patz's wrongful death in May 2004. They were awarded a sum of $2 million, which they have never collected because Ramos is serving a prison term for molesting boys in Pennsylvania. He will have served his full sentence in 2014. Without evidence, a body or a crime scene, some investigators do not believe they will ever be able to convict Ramos for Patz's death.

In the 1983 movie Without a Trace, starring Kate Nelligan and Judd Hirsch, a six year old boy disappears while walking to school in Manhattan. The Stanley Jaffe film was loosely based on the Patz case. (info from Wikipedia. MissingKids.com and North Carolina Dep't of Crime Control)
Posted by Michael N. Marcus at 5:38 AM