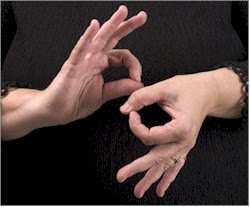 ASL is also used (sometimes alongside indigenous sign languages) in the Philippines, Malaysia, Singapore, Hong Kong, Dominican Republic, El Salvador, Haiti, Puerto Rico, Côte d'Ivoire, Burkina Faso, Ghana, Togo, Benin, Nigeria, Chad, Gabon, Democratic Republic of the Congo, Central African Republic, Mauritania, Kenya, Madagascar, and Zimbabwe. Like other sign languages, its grammar and syntax are distinct from any spoken language in its area of influence. While there has been no reliable survey of the number of people who use ASL as their primary language, estimates range from 500,000 to 2 million in the US alone

Congregationalist minister and deaf educator Thomas Hopkins Gallaudet is credited with popularizing the signing technique in North America. At the behest of a father who was interested in education for his deaf daughter, Alice Cogswell, Gallaudet was enlisted to investigate methods of teaching the deaf.

In the early 1800s he visited the Abbé de l'Épée's school in Paris and convinced one of the teachers, Laurent Clerc, to return with him to America. In 1817 they founded the American Asylum for the Deaf and Dumb (now the American School for the Deaf), in Hartford, Connecticut, to teach sign language to American deaf students.

It was at this school that all these influences would intermingle, interact and what would become ASL was born. Many of the school's students were from Martha's Vineyard, and they mixed their "native" sign language with Clerc's OFSL. Other students probably brought their own highly localized sign language or "home sign" systems to the mix. Undoubtedly, spontaneous lexicon developed at the school as well. If there was any influence from sign language of indigenous people, it may have been here that it was absorbed into the language.

Interestingly, because of the early influence of the sign language of France upon the school, the vocabularies of ASL and modern French Sign Language are approximately 60% shared, whereas ASL and British Sign Language, for example, are almost completely dissimilar.

From its synthesis at this first public school for the deaf in North America, the language went on to grow. Many of the graduates of this school went on to found schools of their own in many other states, thus spreading the methods of Gallaudet and Clerc and serving to expand and standardize the language; as with most languages though, there are regional variations.

After being strongly established in the United States there was a bitter fight between those who supported oralism over manualism in the late 1800s. Many notable individuals of high standing contributed to this row, such as Alexander Graham Bell. The oralists won many battles and for a long time the use of sign was suppressed, socially and pedagogically. Many considered sign to not even be a language at all. This situation was changed by William Stokoe, a professor of English hired at Gallaudet University in 1955. He immediately became fascinated by ASL and began serious study of it. Eventually, through publication in linguistics journals of articles containing detailed linguistic analysis of ASL, he was able to convince the scientific mainstream that ASL was indeed a natural language on a par with any other.

The language continues to grow and change like any living language. In particular, ASL constantly adds new signs in an attempt to keep up with constantly changing technology.
Posted by Michael N. Marcus at 2:31 AM