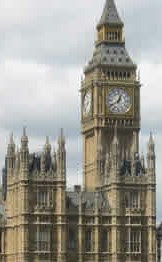 Britain was the first country to set the time throughout a region to one standard time. The railways cared most about the inconsistencies of local time, and they forced a uniform time on the country.

The original idea was credited to Dr. William Hyde Wollaston (1766-1828) and was popularized by Abraham Follett Osler (1808-1903). The Great Western Railway was the first to adopt London time, in November 1840. Other railways followed suit, and by 1847 most (though not all) railways used London time.

On September 22, 1847, the Railway Clearing House, an industry standards body, recommended that GMT be adopted at all stations as soon as the General Post Office permitted it. The transition occurred on December 1 for several railways.

By 1855, the vast majority of public clocks in Britain were set to GMT (though some, like the great clock on Tom Tower at Christ Church, Oxford, were fitted with two minute hands, one for local time and one for GMT). The last major holdout was the legal system, which stubbornly stuck to local time for many years, leading to oddities like polls opening at 08:13 and closing at 16:13. The legal system finally switched to GMT when the Statutes (Definition of Time) Act took effect on August 2, 1880.

Standard time in time zones was instituted in the U.S. and Canada by the railroads on November 18, 1883. (info from webexhibits.org) (photo from londontoolkit.com)
Posted by Michael N. Marcus at 5:35 AM