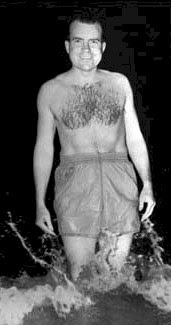 Richard Milhous Nixon (1913 – 1994) was the 37th President of the US, from 1969 to 1974. Prior to being elected President, Nixon served as the 36th Vice President in the administration of Dwight D. Eisenhower from 1953 to 1961. During the Second World War, he was a Navy lieutenant commander in the Pacific, before being elected to Congress, and later serving as Vice President. After an unsuccessful presidential run in 1960, Nixon was elected in 1968.

Under President Nixon, the US followed a foreign policy marked by détente with the Soviet Union and by the opening of diplomatic relations with the People's Republic of China. Domestically, his administration faced resistance to the Vietnam War. As a result of the Watergate scandal, Nixon resigned the presidency in the face of likely impeachment by the House of Representatives and conviction by the Senate. His successor, Gerald Ford, issued a controversial pardon for any federal crimes Nixon may have committed. Nixon is the only person to be elected twice to the offices of the presidency and the vice presidency, and is the only president to have resigned the office of president.

Spiro Theodore Agnew was Nixon's first Vice President. He resigned in 1973 after he was charged with tax evasion.

After he became president in January 1969, Nixon appointed John Mitchell attorney general while making an unprecedented direct appeal to FBI Director J. Edgar Hoover that the usual background investigation not be conducted. Mitchell remained in office from 1969 until he resigned in 1972 to manage Nixon's successful reelection campaign. As attorney general, Mitchell believed that the government's need for "law and order" justified restrictions on civil liberties. He advocated the use of wiretaps in national security cases without obtaining a court order and the right of police to employ the preventive detention of criminal suspects. In 1975, Mitchell was found guilty of conspiracy, obstruction of justice, and perjury and sentenced to prison for his role in the Watergate break-in and cover-up.

Milhouse Mussolini Van Houten is a fictional character in the animated television series The Simpsons. He is Bart Simpson's best friend in Mrs. Krabappel's grade class at Springfield Elementary School. Milhouse was named after Nixon, whose middle name was Milhous. The name is said to be the most "unfortunate name (Simpsons creator) Matt Groening could think of for a kid." (Info from Wikipedia)
Posted by Michael N. Marcus at 4:57 AM