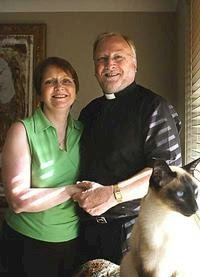 For many years, Catholic priests were allowed to marry, but the rules for Roman Catholics changed in 1139, under Pope Innocent II. (Priests in Eastern Rite Catholic churches may marry prior to ordination.)

On July 22, 1980, the rules for Roman Catholics changed again. Married non-Catholic clergy were allowed to remain married after converting to Catholicism and being ordained as Catholic priests.

Thus, a current Catholic priest who wants to get married must choose between marriage and the priesthood, while a married Lutheran minister or Episcopal priest can become a Catholic priest and keep his wife. This seems unfair to some Catholic priests who left the clergy to marry. Some priests who married continue to function as priests, defying the Vatican.

Many of the apostles were married. Seven popes were married. Thirteen popes were sons of priests. Six popes fathered children after the 1139 Celibacy Law. Pope Alexander VI had grandsons who became cardinals. (Info from FutureChurch.com, and other sources. Photo from Sydney Morning Herald)