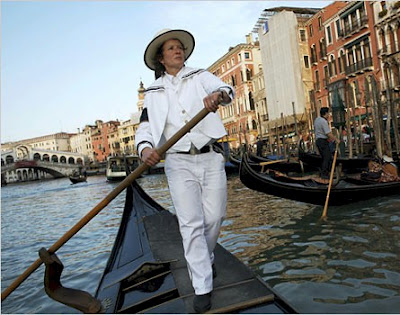 For more than a thousand years, Venice has had gondolas but never a female gondolier until last year.

As Alexandra Hai paddles through the canals, many people shout encouragement. She won the right to run a hotel gondola but not to be called a gondolier. After a decade of struggle, Hai has won the right to be a gondolier — sort of. A court allowed her to paddle around the canals of Venice, but only for the residents of one of the city’s hotels.

The 425 gondoliers of Venice, who practice a traditional, all-male craft, and who often hand down their jobs from father to son, are opposed to her.

Roberto Luppi, president of the gondoliers’ association, said that Hai, a 40-year-old of German and Algerian descent, had been proven incapable of the complicated duties of handling a 35-foot-long gondola, having failed four tests, and that she used the fact that she is a woman to whip up interest in the news media.

When asked about Hai’s accusations that gondoliers had physically threatened her, he reacted with scorn. “After a person accuses gondoliers of being racists and sexists, what does she expect?” he said. “That they are supposed to give her kisses?”

The dispute is playing out in a graceful, decaying, threatened city that resists change and survives on tourism. In the past half-century, Venice has experienced an exodus of residents. Its population, which stood at 184,000 in 1950, is now a third of that. Recurring flooding and rising tides have left many palazzos decrepit and uninhabitable. At night parts of the historical center are as deserted as an abandoned movie set.

A pioneering forerunner to Hai was Ljubica Gunj, who eight years ago became the first woman permitted to wait on customers at tables on St. Mark’s Square. “I think it is chauvinism,” she said of the opposition to Hai. While Gunj tends tables at the Aurora Café, the Florian Café next door — in business since 1720 — lets women wait on tables only indoors, not on the piazza.

Hai is the center of a story that includes charges of sexism, reverse sexism, mastery of the waterways and bias against foreigners.

She also contends that the gondoliers’ association, despite warm overtures at the outset, never wanted a woman or a foreigner among their ranks. (She holds a German passport and has been here for 11 years.)

Hai rattled off her suspicions, which are provocative but unproven: that in one test, she was forced to use an oar that was as “light as a cigarette” and that in another, her route was littered by an unusually high number of moored motorboats. After the Locanda Art Deco hotel hired her privately, she was regularly pulled over by the police to make sure her passengers were from that hotel, she said.

To gondoliers, the job is fit only for a man, since it involves strength, ability to navigate currents and paddle in reverse, and even the aesthetics of the gondoliers of yore in their black-and-white striped shirts.

Despite her marathon to win acceptance from the gondoliers, Hai says she is not exactly a fierce warrior. Indeed, she finds herself miscast for the role. “There is nothing worse than to do something like this,” she said in a chat at a cafe in the Piazza St. Angelo, describing the decade she spent pressing for limited acceptance. “It is sad to waste my entire life like this. I would have preferred to do something more useful in life, like helping save the rain forests.” (info & photo from The New York Times)
Posted by Michael N. Marcus at 5:29 AM

When I was in Venice I loved paddlers suits and striped shirts so cool looking and also the hat is juts class :)