1938: Kristallnacht, the beginning of the Holocaust 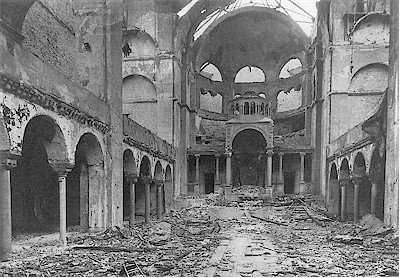 70 years ago, Kristallnacht (literally "Crystal night" or the Night of Broken Glass) was a pogrom in Nazi Germany on November 9–10, 1938. On a single night, 92 Jews were murdered and 25,000–30,000 were arrested and deported to concentration camps.

On November 7, 1938, Herschel Grynszpan, a 17-year old German Jew enraged by his family's expulsion from Germany, walked into the German Embassy in Paris and fired five shots at a junior diplomat, Ernst vom Rath. Two days later, the diplomat died and Germany was in the grip of skillfully orchestrated anti-Jewish violence. In the early hours of November 10, coordinated destruction broke out in cities, towns and villages throughout the Third Reich.

The consequences of this violence were disastrous for the Jews of the Third Reich. In a single night, Kristallnacht saw the destruction of more than 200 Synagogues, and the ransacking of tens of thousands of Jewish businesses and homes. It marked the beginning of the systematic eradication of a people who could trace their ancestry in Germany to Roman times, and served as a prelude to the Holocaust that was to follow. (Info from Wikipedia. Photo shows a synagogue destroyed on Kristallnacht)
Posted by Michael N. Marcus at 2:52 PM

Thank you sir for this fine article. We do need to remember for, unfortunately, we are all capable of allowing Power to overrule Love and sanity. I doubt if I will live long enough to see it, but this makes me wonder what kind of observances there will be when the 100th Anniversary of WW2 arrives ( after all, the whole thing started in the 30’s and we are not to far from seeing that date again). I imagine that there will be much celebration in remembering the victory of the allies, but I hope that it will also be a true observance of repentance and soul searching as will. Only time will tell, but I would assume some groups may already be planning for that Anniversary.