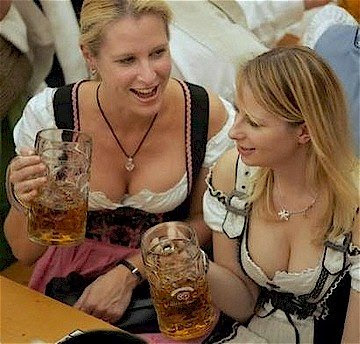 The Oktoberfest is a sixteen-day festival held each year in Munich, Bavaria, Germany during late September and early October). It is one of the most famous events in the city and the world's largest fair, with some six million people attending every year, and is an enjoyable event with an important part of Bavarian culture. Other cities across the world also hold Oktoberfest celebrations, modeled after the Munich event.

The original Oktoberfest occurred in Munich, on October 12, 1810. For the commemoration of their marriage, Crown Prince Ludwig (later King Ludwig I) and Princess Therese of Saxe-Hildburghausen (namesake of the Theresienwiese festival grounds) organized a great horse race (the marriage took place on October 12; the horse race on October 17 — therefore, there are different dates named as being the first Oktoberfest).

Oktoberfestbiers are the beers that have been served at the event in Munich since 1818, and are supplied by 6 breweries known as the Big Six: Spaten, Löwenbräu, Augustiner, Hofbräu, Paulaner and Hacker-Pschorr.

Traditionally Oktoberfestbiers were lagers called Märzen -- brewed in March and allowed to ferment slowly during the summer months. Originally these would have been dark lagers, but from 1872 a strong March brewed version of an amber-red Vienna lager made by Josef Sedlmayr became the favourite Oktoberfestbier.

The Munich Oktoberfest, traditionally, takes place during the sixteen days up to and including the first Sunday in October. In 1990, the schedule was modified in response to German reunification so that if the first Sunday in October falls on the 1st or 2nd, then the festival will go on until October 3rd (German Unity Day). Thus, the festival is now 17 days when the 1st Sunday is October 2nd and 18 days when it is October 1st. The festival is held on an area named the Theresienwiese (field, or meadow, of Therese), often called d’ Wiesn for short.

The list of lost items collected is a good indication of how intense the partying can get -- last year it included four sets of false teeth, 1,600 pieces of clothing, 600 identity cards and credit cards, and one complete Dirndl dress. (info from Wikipedia and Harry Newton)
Posted by Michael N. Marcus at 9:26 AM