1987: Sarah Palin had her first abortion 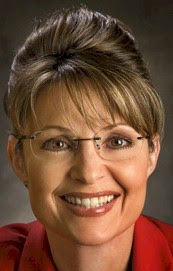 She is the only one of the four major political candidates who has refused to release medical records. Maybe Governor Sarah Palin is hiding an abortion or two.

(By the way, compared to Track and Trig, Barack seems like a perfectly normal name.)

Since the Moose Mama has demonstrated so little regard for the truth in the current political campaign, I see no reason not to have a little fun at her expense. Google usually picks up this blog pretty fast, so let's see where the alleged news goes.

UPDATE: Five hours after I posted this, if you Google the phrase: "Governor Sarah Palin had her first abortion in 1995" you'll get a link to this blog. If you read it on the Internet, it must be true.
Posted by Michael N. Marcus at 1:05 AM

Palin had an abortion? This would make sense why she is dead set against it. At 17 In 1983 I had an oops pregnancy. Fortunately I had (and have) a father that I could tell the truth to. I cried & cried on his shoulder. I am so thankful for a level head and support of choice & choices. My dads compassion, wisdom, honesty, emotional & financial support gave me light in my darkness. I decided to stop the growth of an embryo. My future was free to get an education, skills, get married and have a beautiful daughter with an ever present loving father with a home. She is now a 15. I share my example with her so she won't make the same promiscuous teenage mistake. We are all faced with choices in life good & bad. It makes us who we are.
Christian Diva Sarah will have to live with her choices. Just as her daughter will have too by having not one, but two bastard children.
Harsh, but technically true from the open book of Webster.

Something is very odd about this Woman to be sure. She lives by her own rules - not a "Maverick" but an Outlaw. And Outlaws used to be hanged under the old Oak tree back in the day.

I suspect her medical records will reveal some hypocricy or another.

Probably the REAL reason is this: She know the election is LOST and there is no point in revealing any embarrasing information now, when she is going back to Alaska, anyway.

She thinks (seriously) that she is the "Next Ronald Reagan". No, really, she thinks that. Wow. Reagan was a rocket scientist compared to her!

WHo gives a shit.