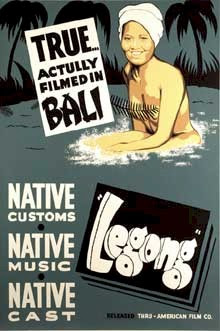 The first commercial screening of movies with fully synchronized sound took place in 1923, and the first feature-length movie originally presented as a talkie was The Jazz Singer, released in 1927; but silent films continued to be made into the next decade.

The last silent film ever produced in Hollywood was released by Paramount International in 1935. Legong: Dance of the Virgins, was originally shown only outside the US due to concerns about female nudity in the film and the uproar it would cause. It was fiilmed in Bali, Indonesia.

The movie is a tragic tale of love denied. Poutou, a young girl who is a respected Legong dancer, falls in love with young musician Nyoung. Her father is delighted with Poutou's choice and wants to help her to conquer Nyoung's heart. But Poutou's half sister Saplak also wants Nyoung, and when he chooses Saplak, Poutou drowns herself. The movie displays Balinese culture including frenetic dances, mystical parades, the local marketplace, a cockfight and a mass cremation.

Finally in the late 1930's it was shown in theaters in Hollywood and New York City attracting thousands to see bare-breasted native girls. (info from BaliFilm.com, Milestone Films and Wikipedia)
Posted by Michael N. Marcus at 5:49 AM