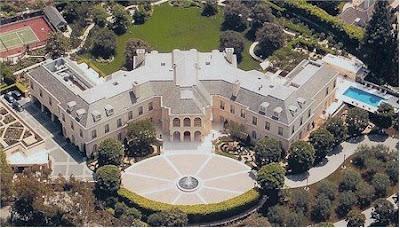 Downsizing to a $47 million condominium on the top two floors of a building in Century City, Candy Spelling, widow of TV producer Aaron Spelling, is offering her Los Angeles mansion for $150 million. It's apparently the most expensive home for sale in the US.

The 57,000-square-foot house, dubbed "the Manor" and featured on guided tours of Hollywood mansions, includes a bowling alley, a beauty salon, a gift-wrapping room and a screening room with a screen that rises out of the floor.

The Spellings bought the nearly five-acre property, at one time the home of Bing Crosby, in the early 1980s, tore down the house and rebuilt. When completed in 1991 it was considered by far the largest home in Los Angeles.

Since Mrs. Spelling announced her planned move to Century City, she's fielded roughly a dozen calls from qualified buyers. She didn't consider lowering the price. "The ones who could afford it three years ago, can still afford it today," her attorney said. $150 million "is not a lot." (info and photo from The Wall Street Journal)
Posted by Michael N. Marcus at 6:40 AM