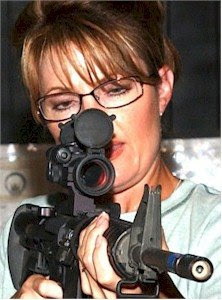 Earlier this week, a Denny's restaurant in West Haven was the site of the first "Sarah meet-up" for supporters of the former Republican veep candidate.

The man in charge is John Streitz, who is co-director of Connecticut Citizens for Immigration Control. He co-founded the first federally registered committee with the goal of raising money to draft Palin for president in 2012. So far, the committee has collected about $3,000.

The 2012 Draft Sarah Committee is based in Colorado, where the group’s other founder lives, and officially filed paperwork Nov. 20 with the Federal Election Commission. The goal of the "meet-ups" is to provide a chance for like-minded people who want Palin to run in 2012 to get together.

"Her values resonate with the American public," Streitz said.

Most of the people at the gathering are friends of Streitz who share his desire for tougher anti-immigration laws.

"And she has a good brain to go with it," added Veronica Kivela. "She is a fine American."

According to Jim Troyer, "The thing I like best about her is she has international experience. Her state borders Russia and Canada, and China isn’t too far away."

BUT DOESN'T IT MATTER THAT SARAH IS INARTICULATE, IGNORANT, UNPREPARED AND A HYPOCRITE? And many people thought she was a terrible candidate and a major reason the Republicans lost the election.
(info from The New Haven Register)
Posted by Michael N. Marcus at 9:45 AM

Who cares if she's an idiot. Rush Dimbulb sez Sarah is HOT! And she's willing to have sex outside of marriage. So's her idiot kid.

I'd bang either of them, if they promised not to talk to me.