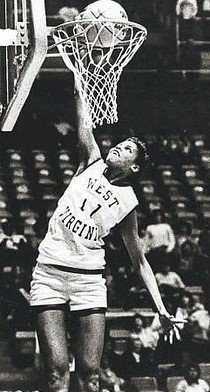 On Dec. 21, 1984, about 100 people in Elkins, West Virginai were in the town armory to watch a women's basketball game between West Virginia and the University of Charleston. They witnessed history.

With 11 minutes, 18 seconds remaining in the game, West Virginia's 6-foot-7 junior center, Georgeann Wells, took a long pass at half court, and with a clear path to the basket, rose up and slammed the ball. With the first official dunk in a college game, women's sports reached a milestone.

Unlike the first sub-four-minute mile, which was broken within months, and other athletic firsts that were seconded and thirded almost instantly, no other woman would dunk in college for another decade.

The game was also remarkable for another reason: No visual evidence of the play was ever released. Newspaper articles ran without photos and TV stations covered it without any visuals. Some people didn't believe it happened.

But there was a tape. Bud Francis, the coach of the opposing team, Charleston, had a man stationed near the stage on the east side of the armory, and his camera lens was pointed directly at Wells during the dunk. Despite repeated requests from media and West Virginia University, Francis never released the tape.

Wells's coach, Kittie Blakemore, says she assumed the recording had been destroyed. The coach died in 1999 and the secret of the lost tape seemingly went with him to the grave.

Earlier this year, Francis's son, Ford, looked in an old box of his father's. He found a nondescript videocassette labeled "W.V.U.-84 Elkins." It was the tape of the dunk. The picture has deteriorated slightly, but what can clearly be seen is Georgeann Wells, leaping through the air and slamming the ball with authority. As of now, only three women players in the WNBA and five college players have dunked.

Georgeann Wells grew up in Ohio as one of nine children. Most of her siblings were talented athletes too. With her tremendous height, she was a top prospect starting in middle school, even though she was awkward and uncoordinated at first.

Newspapers across the country ran stories about the dunk shot. But when television stations called West Virginia to request footage, they said the Charleston coach, Francis, had the only tape.

Says Blakemore, West Virginia's head coach at the time, "For years, I would see [Mr. Francis] at coaching functions, and I'd ask him about it. He'd say, 'You aren't getting that tape, Kittie.' "

Wells recreated the famous dunk a year later in 1985 at the Basketball Hall of Fame. The game ball used for the dunk is enshrined there. Because no one outside the losing Charleston team saw the recording, some people didn't believe she actually dunked, Wells remembers. But she quieted the naysayers when she did it again in a televised game that has been played on ESPN highlight reels.

Francis threw out most of his old game tapes when he left his coaching job in 1986. But when he died unexpectedly in 1999, his son, Ford Francis, ended up with a box of VHS tapes. He never paid any attention to the one marked "W.V.U.-84 Elkins." He had heard about the dunk but says he thought it happened much later.

After a call from The Wall Street Journal explaining that he might have the tape and that Wells dunked in 1984, Francis popped it into his VHS machine and watched it on his big-screen TV. "There it was," says Mr. Francis. "I couldn't believe it."

Wells, now a physical-education teacher, recently watched the tape on the screen of a laptop computer. "Wow!" she said, pointing out the dunk to her 7-year-old son, Kasey, and her 13-year-old daughter, Maddison.

Now, the debate in the Wells household is not about old dunks, but about who's going to dunk next. Maddison says she'll dunk by sophomore year in high school. (info from The Wall Street Journal; photo is (c) Copyright 1984 by David L. Zicherman and used with permission.)
Posted by Michael N. Marcus at 8:49 AM

This guy is really lucky !