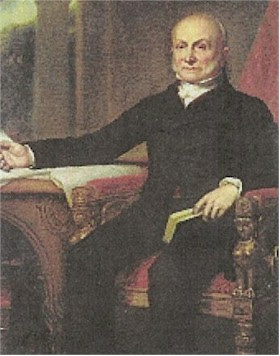 Inaugural costume, while generally formal, has varied over the years.

A contemporary account reported that Washington wore "a complete suit of Homespun Cloaths; the cloth was of a fine fabric and as handsomely finished as any European superfine cloth."

The first five Presidents wore knickers to their ceremonies, with John Quincy Adams the first to move into trousers.

In 1901, Theodore Roosevelt, an apostle of the strenuous life, was the first to deliver his Inaugural Address bareheaded.

Jimmy Carter rejected this elegance for a business suit in 1977, but Ronald Reagan reinstated the cutaway in 1981. In 1985, frigid weather drove Reagan into the Capitol for a semiprivate oath-taking and, sartorially, into a business suit.

Pants-wearing John Quincy Adams served as the sixth President of the United States from March 4, 1825 to March 4, 1829. He was a member of the Federalist, Democratic-Republican, National Republican, and later Anti-Masonic and Whig parties.

Adams was the son of the second President John Adams and his wife Abigail Adams, the name "Quincy" having come from Abigail's maternal grandfather, Colonel John Quincy, after whom Quincy, Massachusetts is also named. He was a diplomat, involved in many international negotiations, and helped formulate the Monroe Doctrine as Secretary of State. As president he proposed a program of modernization and educational advancement, but was stymied by Congress. Adams lost his 1828 bid for re-election to Andrew Jackson.

Adams was elected a US Representative from Massachusetts after leaving office, the only president ever to do so, serving for the last 17 years of his life. In the House he became a leading opponent of the Slave Power and argued that if a civil war ever broke out the president could abolish slavery by using his war powers, which Abraham Lincoln partially did during the Civil War in the 1863 Emancipation Proclamation. (info from The New York Times and Wikipedia)
Posted by Michael N. Marcus at 5:58 AM