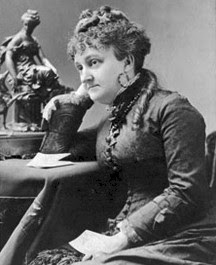 Myra Colby Bradwell was born in 1831 in Vermont. In 1852, she married James B. Bradwell and they operated a private school in Tennessee. In 1855 her husband was admitted to the Chicago bar and became a successful lawyer, judge and in 1873 was elected to the state legislature.

In 1868, Myra Bradwell established the Chicago Legal News, and was the business and editorial manager. Bradwell published information about court opinions, laws, and ordinances, which were admissible in court. The paper also supported many reforms such as woman suffrage, efforts to gain employment for women attorneys, improvement of court systems, and railroad regulation.

She published “History of Woman Suffrage,” which was edited by women’s rights activists Elizabeth Cady Stanton, Susan B. Anthony and Matilda Joslyn Gage. This volume discussed women’s patriotism, beginning with the American Revolution and continuing to the efforts for suffrage.

In an 1869 edition of the Chicago Legal News, Bradwell wrote about her philosophy of how suffrage would be achieved: “You ask us, how shall this great privilege be obtained for women? We will tell you. Not by the class who term man ‘a tyrant’— but by the sensible and devoted mothers, wives and daughters of the state unifying together, we mean those who have the respect and love of their fathers, husbands and brothers, and asking them that they give to women the right to vote.”

Bradwell often used humor to make her point and felt that it was effective in the courtroom. In an 1880 edition of the Legal News, she said, “A lawyer’s wit sometimes, does more than enliven a dull hour in court. It so opens the eyes for the Judge that he sees with clearness a point that otherwise he would have ignored.”

In addition to her activities as owner and editor of the Chicago Legal News, Bradwell assisted in securing the passage of the 1869 bill that gave married women the right to retain their own wages and protect the rights of widows. Bradwell and her husband participated in the organization of Chicago’s first woman suffrage convention and the founding of Cleveland’s American Woman Suffrage Association.

In 1869, Bradwell passed the Illinois Bar Exam with honors. She then applied to the Illinois Supreme court for admission to the bar. The court refused her application because she was a woman. The decision was upheld by the US Supreme Court in Bradwell v. Illinois.

The opinion of Justice Bradley in the case reflected the nineteenth century society belief about women not participating in the workforce, he said: “The civil law, as well as nature itself, has always recognized a wide difference in the respective spheres and destinies of man and woman. Man is, or should be, woman’s protector and defender. The natural and proper timidity and delicacy which belongs to the female sex evidently unfits it for many of the occupations of civil life. The constitution of the family organization, which is founded in the divine ordinance, as well as in the nature of things, indicates the domestic sphere as that which properly belongs to the domain and functions of womanhood. The harmony, not to say the identity, of interests and views which belong, or should belong, to the family institution is repugnant to the idea for a woman adopting a distinct and independent career from that of her husband…for these reasons I think that the laws of Illinois now complained of are not obnoxious to the charge of any abridging any of the privileges and immunities of cities of the United States.”

Eventually, Illinois changed the rules for admitting women to the bar. In 1890, Bradwell was admitted to the Illinois bar and in 1892, she received a license to practice before the US Supreme Court.

Myra Bradwell died in 1894. Her daughter, Bessie Bradwell Helmer continued her mother’s work with a career in law and publication of the Chicago Legal News. The tribute to Bradwell in the February 24, 1894 edition of the Chicago Legal News stated, “The future historian will accord her the breaking of the chain that bound woman (sic) to a life of household drudgery. She opened the door of the professions to her sex, and compelled law makers and judges as well, to proclaim that it was not a crime to be born a woman.” (info from essortment.com)
Posted by Michael N. Marcus at 6:30 AM

Such an amazing story. Myra Bradwell accomplished a whole lot in her lifetime. Did she take any cases in the two years after receiving her license before her death?