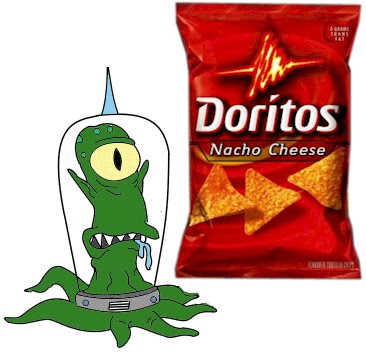 On June 12, 2008, Doritos made history, as they broadcast the first ever commercial directed towards possible extra terrestrial beings.

The transmission, aided by the University of Leicester in England, was undertaken as part of the Doritos Broadcast Project, which invited the British public to create a 30 second video clip that could be beamed out to the universe offering a snapshot of life on earth to anyone "out there." Some 61% of the UK public believe this is just the start of communication with ET life and that we will enter into regular communication with an alien species at some stage in the future.

The winning space-ad entitled "Tribe" was voted for by the British public and directed by 25-year-old Matt Bowron. It will officially be entered into the Guinness Book of Records and was aired on the more conventional medium of television after the interplanetary transmission during a soccer game.

The space message was pulsed out over a six-hour period from high-powered radars at the EISCAT European space station in the Arctic Circle.

EISCAT Director, Professor Tony van Eyken who supervised the transmission said: “The signal is directed at a solar system just 42 light years away from Earth, in the Ursa Major or Great Bear Constellation. Its star is very similar to our Sun and hosts a habitable zone that could harbor small life-supporting planets similar to ours.”

Peter Charles, Head of the Doritos Broadcast Project said: “We are constantly looking to push the boundaries of advertising and this will go further than any brand has gone before. By broadcasting the winning ad to the Universe, Doritos is delivering a world first and Matt Bowron, the winner, will go down in advertising folklore. We also shouldn’t be too surprised if the first aliens start arriving on planet Earth immediately demanding a bag of Doritos.”

The broadcast received praise from Nick Pope, former Head of the MoD’s UFO project. Nick, a leading authority on UFO sightings and alien abductions commented: “I support this bold new venture in space communication. As humanity reaches out to the stars, this broadcast could lead to us finding the real ET. This is a historic day in our continuing search for alien life.”

The commercial features a tribe of Doritos escaping from the pack and sacrificing one of their own to the God of Salsa, as soon as there are no humans around. (info from Science Daily)
Posted by Michael N. Marcus at 4:21 AM