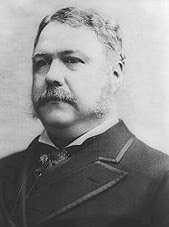 Barack Obama was not the first US president to take the presidential oath twice for the same term -- he was the third one.

Arthur took the oath of office twice. The first time was just past midnight in his Manhattan home on September 20 with New York Supreme Court Justice John R. Brady. The second time was upon his return to Washington two days later.

On August 2, 1923, President Warren Harding died while on a speaking tour in California. Vice-President Calvin Coolidge (1872 – 1933) was visiting his family home in Vermont, with no electricity or telephone, when he received word by messenger of Harding's death. Coolidge dressed, said a prayer, and came downstairs to greet the reporters who had assembled.

His father, a notary public, administered the oath of office in the family's parlor by the light of a kerosene lamp at 2:47 a.m. on August 3, 1923; Coolidge then went back to bed.

Coolidge returned to Washington the next day, and was re-sworn by Justice A. A. Hoehling of the Supreme Court of the District of Columbia, as there was some confusion over whether a state notary public had the authority to administer the presidential oath.

This week, after the flub heard around the world, President #44 Barack Obama had his re-do. Just like the first time, Chief Justice John Roberts delivered the oath to Obama -- on Wednesday night at the White House. The surprise moment came in response to Tuesday's much-noticed stumble, when Roberts got the words of the oath a little off, which prompted Obama to do so, too.

The White House says: Obama has still been president since noon on Inauguration Day. Nevertheless, Obama and Roberts went through it again out of what White House counsel Greg Craig called "an abundance of caution."

This time, the scene was the White House Map Room in front of a small group of reporters, not the Capitol platform before the whole world.

"We decided that because it was so much fun ...," Obama joked to reporters who followed press secretary Robert Gibbs into the room. No TV camera crews or news photographers were allowed in. A few of Obama's closest aides were there, along with a White House photographer.

Roberts put on his black robe. "Are you ready to take the oath?" he said.

Roberts then led Obama through the oath without any missteps.

The president said he did not have his Bible with him, but that the oath was binding anyway.

The original, bungled version on Tuesday caught observers by surprise and then got replayed on news shows. It happened when Obama interrupted Roberts midway through the opening line, in which the president repeats his name and solemnly swears.

That appeared to throw Obama off. He stopped abruptly at the word "execute."

Recognizing something was off, Roberts then repeated the phrase, putting "faithfully" in the right place but without repeating "execute."

But Obama then repeated Roberts' original, incorrect version: "... the office of president of the United States faithfully."

Craig, the White House lawyer, said: "We believe the oath of office was administered effectively and that the president was sworn in appropriately yesterday. Yet the oath appears in the Constitution itself. And out of the abundance of caution, because there was one word out of sequence, Chief Justice John Roberts will administer the oath a second time." (info from The Associated Press and Google)
Posted by Michael N. Marcus at 6:21 AM