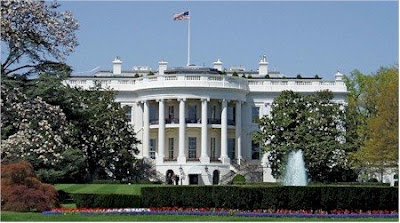 The White House, formerly known as the Executive Mansion, is the official residence and principal workplace of the President of the United States. Located at 1600 Pennsylvania Avenue NW in Washington, D.C., it was built between 1792 and 1800 of white-painted Aquia sandstone in the late Georgian style and has been the executive residence of every US President since John Adams. When Thomas Jefferson moved into the home in 1801, he, with architect Benjamin Henry Latrobe, expanded the building outward, creating two colonnades which were meant to conceal stables and storage.

In 1814, during the War of 1812, the mansion was set ablaze by the British Army in the Burning of Washington, destroying the interior and charring much of the exterior walls. Reconstruction began almost immediately, and President James Monroe moved into the partially reconstructed house in October 1817.

Construction continued with the addition of the South Portico in 1824 and the North in 1829. Due to crowding within the executive mansion itself, President Theodore Roosevelt had nearly all work offices relocated to the newly-constructed West Wing in 1901.

Eight years later, President William Howard Taft expanded the West Wing and created the first Oval Office which was eventually moved as the section was expanded. The third-floor attic was converted to living quarters in 1927 by augmenting the existing hip roof with long shed dormers. A newly constructed East Wing was used as a reception area for social events; both new wings were connected by Jefferson's colonnades.

East Wing alterations were completed in 1946 creating additional office space. By 1948, the house's load-bearing exterior walls and internal wood beams were found to be close to failure. Under Harry S. Truman, the interior rooms were completely dismantled, resulting in the construction of a new internal load-bearing steel framework and the reassembly of the interior rooms.

Today, the White House Complex includes the Executive Residence (in which the First Family resides), the West Wing (the location of the Oval Office, Cabinet Room, and Roosevelt Room), and the East Wing (the location of the office of the First Lady and White House Social Secretary), as well as the Old Executive Office Building, which houses the executive offices of the President and Vice President.

The White House is made up of six stories: the Ground Floor, State Floor, Second Floor, and Third Floor, as well as a two-story basement. The term White House is regularly used to imply the Executive Office of the President of the United States and for the president's administration and advisors in general. The property is owned by the National Park Service and is part of the President's Park.

The building was originally referred to variously as the "President's Palace", "Presidential Mansion", or "President's House". The earliest evidence of the public calling it the "White House" was recorded in 1811. A legend emerged that during the rebuilding of the structure white paint was applied to mask the burn damage it had suffered, giving the building its namesake color; this is unfounded as the building had been painted white since its construction in 1798.

The name "Executive Mansion" was used in official contexts until President Theodore Roosevelt established the formal name by having the de facto name "White House–Washington" engraved on the stationery in 1901. The current letterhead wording and arrangement "The White House" with the word "Washington" centered beneath goes back to the administration of Franklin Delano Roosevelt. (info from Wikipedia)
Posted by Michael N. Marcus at 6:22 AM