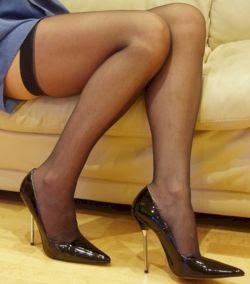 High-heeled shoes quickly caught on with the fashion-conscious men and women of the French court, and spread to pockets of nobility in other countries. The term "well-heeled" became synonymous with opulent wealth. Both men and women continued wearing heels as a matter of noble fashion throughout the seventeenth and eighteenth centuries. When the French Revolution drew near, in the late 1700s, the practice of wearing heels fell into decline in France due to its associations with wealth and aristocracy. Throughout most of the 1800s, flat shoes and sandals were usual for both sexes, but the heel resurfaced in fashion during the late 1800s, almost exclusively among women. (Photo from Wikipedia) (Info from Wikipedia and Answers.com)
Posted by Michael N. Marcus at 5:31 AM

very intersting!
I was curious about that.

I never knew the history of the high heels. I know French kings used to wear them, but this is really interesting. Now we know who to blame!