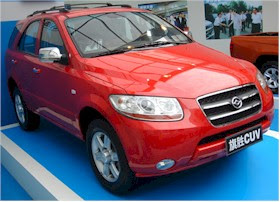 The newly independent Chrysler Group signed a deal on Independence Day with Chery Automobile Co. of China to develop subcompacts and other small vehicles.

If Chrysler and its Chinese partner are able to deliver a high-quality car at low cost - less than $10,000 - the auto industry will be shaken to its foundations, analysts said yesterday.

"It challenges global trade patterns" and has the potential to create massive job dislocation in high-cost countries with long-established vehicle manufacturers, one automotive observer said yesterday. "You're talking about an industry that is a core industry in a whole bunch of countries," the analyst said.

Union leaders have already watched the Detroit Three abandon the subcompact market only to see Chrysler and General Motors re-enter it with vehicles built outside North America at a time when they are slashing tens of thousands of jobs here.

Although Chrysler and Chery have been in talks on a deal for months, the signing ceremony in Beijing yesterday came on the eve of the opening of contract talks that Chrysler and its Detroit rivals Ford and GM will hold this summer with the United Auto Workers.

The companies have warned privately that unless they can dramatically reduce a labor cost disadvantage of $25 an hour versus their Asian competitors in North America during these talks, they will shift more and more investment offshore. The number of vehicles produced in North America fell by two million between 1995 and 2006.

The deal with Chery will fill a major hole in the lineup for Chrysler, which has no subcompact as the North American market shifts to smaller vehicles amid soaring gas prices. Chery, the fourth-largest car maker in China, sold 305,000 vehicles last year, of which 50,000 were exported.

Chrysler Group's move to outsource the entire assembly of some vehicles to a Chinese company puts it at the leading edge of global auto makers looking to use China as an export base.

Executives at Chrysler, which is struggling to pare costs, said the agreement with Chery is likely to serve as a template as the company looks to roll out new models quickly, inexpensively and with less capital investment.

"We will combine Chrysler's research and technology and global reach with Chery's lean manufacturing," Chrysler Chief Executive Tom LaSorda said yesterday. "I would say there are endless possibilities."

Chrysler is moving ahead with its tie-up with a Chinese auto maker as questions mount about the safety of some Chinese exports. A recent crash test by a German motor club on a car from another Chinese manufacturer that is being sold in Europe is raising questions about the safety standards of Chinese vehicles. LaSorda said he doesn't "see any issues" with Chery's safety and quality.

The Chery deal was approved in February by DaimlerChrysler AG's board before the company decided in May to sell 80.1% of unprofitable Chrysler to private-equity firm Cerberus Capital Management.

The first Chinese-made car that Chrysler plans to sell under its Dodge brand will be a modified version of a Chery four-door hatchback known as the A1, LaSorda said. Chery started selling the car in China this year with a retail price of about $7,000 to $7,900.

Chery got its start in 1997 making small cars. General Motors sued Chery in 2004, saying that a Chery subcompact known as the QQ was a copy of the Chevrolet Spark, to which it bears a striking resemblance. The two companies settled the suit in 2005.

The QQ remains the best-seller, but Chery has been moving to produce more sophisticated products, including sedans, crossovers and SUVs, relying heavily on the expertise of foreign firms.

For years, foreign car companies have focused on building autos for the fast-growing Chinese vehicle market, the world's second largest. Now they are increasingly trying to take advantage of China to lower their global production costs.

Trevor Hale, a spokesman for DaimlerChrysler in Beijing, said Chrysler is considering selling the Chinese-made cars first in Latin America and Eastern Europe because there "is more growth potential there," and it won't take as long to modify the cars "to meet customer tastes and market-specific regulations."

It will take longer for Chrysler to prepare the cars for entry into the "very competitive and more developed" North American and Western European markets, Hale said. Chrysler would need to exert more "design, development and engineering influence" before the Chery-made cars would meet "customer tastes and regulatory standards" in the U.S. and European Union. As it is configured for the Chinese market, the A1 wouldn't meet U.S. and European emissions standards.

(info from Troronto Globe & Mail, and The Wall Street Journal)
Posted by Michael N. Marcus at 5:54 AM