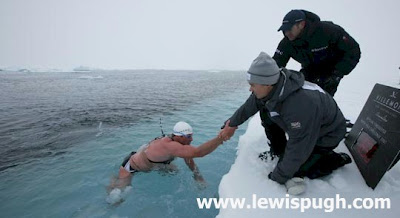 The swim which took 18 minutes took place in freezing temperatures of minus 1.8 degrees centigrade -- the coldest waters a human has ever swum in -- and was conducted in accordance with Channel Swimming Association Rules, in just Speedo briefs, cap and goggles.

The geographic North Pole is situated at 90 degrees north. The previous record held for the coldest point swum by a human is 0 degrees centigrade off Antarctica -- a record also held by Pugh.

Pugh, nicknamed the Polar Bear, said, "I hope my swim will inspire world leaders to take climate change seriously. The decisions which they make over the next few years will determine the biodiversity of our world. I want my children, and their children, to know that polar bears are still living in the Arctic -- these creatures are on the front line up here."

Added Pugh, "I am obviously ecstatic to have succeeded, but this swim is a triumph and a tragedy -- a triumph that I could swim in such ferocious conditions but a tragedy that it's possible to swim at the North Pole."

Pugh's team included Expedition Scout Jorgen Amundsen, who skied alongside him to find open sea amidst the ice to make this record attempt. Amundsen is a relative of Roald Amundsen, the first man to walk to the South Pole and first man to fly across the Arctic Ocean via the North Pole.

Pugh described the swim: "The water was absolutely black. I shook Jorgen Amundsen's hand and then plunged into the sea. It was like jumping into a dark black hole. It was frightening. The pain was immediate and felt like my body was on fire. I was in excruciating pain from beginning to end and I nearly quit on a few occasions. It was without doubt the hardest swim of my life."

"This expedition represents the end of an era of Arctic exploration as we know it," said Amundsen. "Many expeditions fail each year when they encounter big stretches of open sea. I cannot imagine what pioneer explorers like Roald Amundsen and Admiral Robert Peary would have thought of someone swimming at the North Pole."

Other team members included Pugh's mind coach, David Becker and Professor Tim Noakes of the University of Cape Town, who is a leading expert on the effect of cold water on the human body.

"This is the coldest water any human being has ever swum in," said Noakes. "Lewis has worked incredibly hard and undergone an extremely intense period of training to make this as safe as possible for him." His unique ability to withstand cold and raise his body temperature in anticipation of a swim has intrigued sports scientists.

Pugh, 37, explorer, environmentalist and swimmer, is the only person to have completed a long distance swim in each of the five oceans.

In 2003 he completed the first swim in the Barents Sea by swimming around North Cape, Europe's most northern point. The following year, he swam the entire 204km length of Sognefjord, Norway's longest fjord, in an epic feat that took him 21 days to complete. And in August 2005 he plunged into the Arctic Ocean near the North Pole and swam 1km around the most northern point of the island of Spitsbergen at 80 degrees North to break the world record.

In 2005 Lewis completed the most Southern swim in the world when he covered 1km in 18 minutes at Petterman Island, Antarctica in waters of 0 degrees C.

Last summer he completed the challenge of swimming the entire length of the River Thames (203 miles). In February 2007, he swam across the width of the Maldives, a distance of some 87 miles. CLICK for more. (info from Health News Digest)
Posted by Michael N. Marcus at 6:11 AM