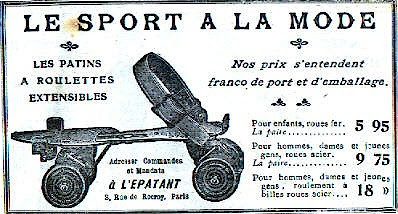 The first recorded use of roller skates was in a London stage performance in 1743. The inventor is unknown. The first known inventor was Jean-Joseph Merlin, who demonstrated a primitive inline skate with metal wheels in Belgium in 1759. The first roller skate design patent was obtained in France by M. Petitbled, in 1819.

These early skates were similar to today's inline skates, but they were not very maneuverable; it was very difficult to do anything but move in a straight line and perhaps make wide sweeping turns. During the rest of the 19th century, inventors continued to work on improving skate design.

The four-wheeled turning roller skate, or quad skate, with four wheels set in two side-by-side pairs, was first designed in 1863 in New York City by James Plimpton in an attempt to improve upon previous designs. The skate contained a pivoting action using a rubber cushion, and this allowed the skater to skate a curve just by leaning to one side. It was a huge success, so much so that the first public skating rink was opened in 1866 in Newport, Rhode Island with the support of Plimpton. The design of the quad skate allowed easier turns and maneuverability, and the quad skate came to dominate the industry for more than a century.

Arguably, the most important advance in the realistic use of roller skates as a pleasurable pastime took place in Birmingham, England in 1876 when William Bown patented a design for the wheels of roller skates. Bown's design embodied his effort to keep the two bearing surfaces of an axle, fixed and moving, apart. Bown worked closely with Joseph Henry Hughes, who drew up the patent for a ball or roller bearing race for bicycle and carriage wheels in 1877. Hughes' patent included all the elements of an adjustable system. These two men are thus responsible for modern day roller skate and skateboard wheels, as well as the ball bearing race used in bicycles, and later motorcycles and cars.

Another improvement came in 1876, when the toe stop was first patented. This provided skaters with the ability to stop promptly upon tipping the skate onto the toe. Toe stops are still used today on most quad skates and on some types of inline skates.

Roller skates were being mass produced in America as early as the 1880s, the sport's first of several boom periods. Micajah C. Henley of Richmond, Indiana produced thousands of skates every week during peak sales. Henley skates were the first skate with adjustable tension via a screw, the ancestor of the kingbolt mechanism on modern quad skates.

In 1884, Levant Richardson received a patent for the use of steel ball bearings in skate wheels to reduce friction. This also allowed skaters to increase speed with minimum effort. In 1898, Richardson started the Richardson Ball Bearing and Skate Company, which provided skates to most professional skate racers of the time.

The design of the quad skate has remained essentially unchanged since then, and in fact remained as the dominant roller skate design until nearly the end of the 20th century.

In 1979 Scott Olson and Brennan Olson of Minneapolis, Minnesota came across a pair of inline skates created in the 1960s by the Chicago Roller Skate Company and, seeing the potential for off-ice hockey training, set about redesigning the skates using modern materials and attaching ice hockey boots. A few years later Scott Olson began heavily promoting the skates and launched Rollerblade, Inc..

During the late 1980s and early 1990s, Rollerblade brand skates became so successful that they inspired many other companies to create similar inline skates, and the inline design became more popular than the traditional quads. The Rollerblade skates became synonymous in the minds of many with "inline skates" and skating, so much so that many people came to call any form of skating "Rollerblading," thus becoming a genericized trademark.

For much of the 1980s and into the 1990s, inline skate models typically sold for general public use employed a hard plastic boot, similar to ski boots. In or about 1995, "soft boot" designs were introduced to the market, primarily by the sporting goods firm K2, and promoted for use as fitness skates. Other companies quickly followed, and by the early 2000s the use of hard shell skates became primarily limited to the aggressive skating discipline.

The single-wheel "quintessence skate" was made in 1988 by Miyshael F. Gailson of Caples Lake Resort, California, for the purpose of cross-country ski skating and telemark skiing training. Other skate designs have been experimented with over the years, including two wheeled (heel and toe) inline skates, but the vast majority of skates on the market today are either quad or standard inline design. (info from Wikipedia and Imaginative Inventions.)
Posted by Michael N. Marcus at 5:32 AM