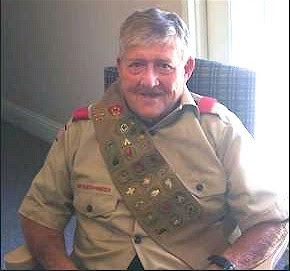 Walter Hart, 88, of Lehigh Acres, FL, received his Boy Scout Eagle Award Saturday, 70 years after he was to receive it originally.

Hart joined the Cub Scouts in 1928 in Malden, MA. He later completed all the requirements for Eagle Scout, but never received the award because he joined the Navy in 1943 and served for two years in Asia.

In 2006, Hart found some of his old Boy Scout memorabilia, including the documents that showed he had completed the requirements for his Eagle Scout Award but never received the badge. Hart contacted the Boy Scouts to inquire about receiving his award, and this year, after verifying the information with the National Office of the Boy Scouts of America, the Southwest Florida Council presented the badge.

Hart, a cancer survivor, underwent a quadruple heart bypass in April. “Pride, honor and the will to never-give up” are the words Hart’s daughter Elizabeth Gatturna uses to describe her father. “He is Boy Scout through and through.”

The Eagle award is a performance-based achievement only about 5 percent of all Boy Scouts earn. To earn the Eagle Scout rank a Boy Scout must fulfill requirements in the areas of leadership, service, and outdoor skills. (info and photo from News-Press.com)