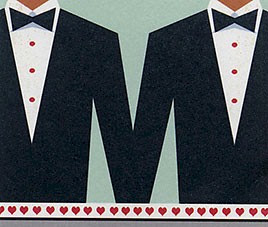 Most states don't recognize gay marriage - but now Hallmark does.

Hallmark added the cards after California joined Massachusetts as the only US states with legal gay marriage. A handful of other states have recognized same-sex civil unions. The language inside the cards is neutral, with no mention of wedding or marriage, making them also suitable for a commitment ceremony.

Hallmark says the move is a response to consumer demand, not political pressure. Hallmark started offering "coming out" cards last year, and the four same-sex marriage cards are being gradually released this summer and will be widely available by next year.

The Williams Institute at the UCLA School of Law estimates that more than 85,000 same-sex couples in the United States have entered into a legal relationship since 1997, when Hawaii started offering some legal benefits to same-sex partners.

It estimates nearly 120,000 more couples will marry in California during the next three years - and that means millions of potential dollars for all sorts of wedding-industry businesses.

Hallmark, known more for its Midwest mores than progressive greetings, has added a wider variety lately. It now offers cards for difficulty getting pregnant or going through rehab.

John Stark, one of the three founders of Three Way Design in Boston, which makes gay-themed cards for occasions from adoption to weddings, has several new designs sketched out and ready.

But he has hesitated adding more wedding cards to his mix until after the November election, when California voters will decide a constitutional amendment that would again limit marriage to a man and a woman in the state. (info from The Associated Press)
Posted by Michael N. Marcus at 5:22 PM