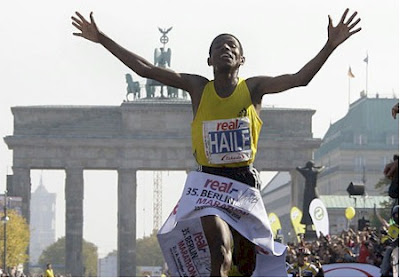 Haile Gebrselassie took advantage of nearly perfect conditions on his favorite course to smash his own marathon world record on Sunday.

The 35-year-old Ethiopian became the first runner to finish under 2 hours, 4 minutes when he won the Berlin Marathon in 2:03:59, slashing 27 seconds off his own world record, set in the same race last year.

Gebrselassie again called Berlin his "lucky city" and thanked a crowd estimated as large as 1 million for helping him set his 26th world record and become the first man to win the race three times.

"Before I came here, I knew I can do something here in Berlin because, since I started running, Berlin is my lucky city," Gebrselassie said.

Running under clear, sunny skies in mild temperatures, Gebrselassie paced himself well and controlled the race from the start.

James Kwambai, who kept up with Gebrselassie for 36 kilometers, finished second in 2:05:36, improving his personal best by nearly five minutes. Another Kenyan, Charles Kamathi, was third in 2:07:48.

Gebrselassie first ran in Berlin in 2006 and clocked 2:05:56 before breaking the world record last year. In three years, he has improved nearly two minutes on his time.

In the women's race, Irina Mikitenko of Germany improved her personal best by more than four minutes to record the seventh fastest time for a woman. She finished in 2:19:19 to break the national record and become the fourth fastest woman of all time, behind record-holder Paula Radcliffe, Catherine Ndereba and Mizuki Noguchi. Askale Magarsa of Ethiopia was second in 2:21:31 and Helena Kirop of Kenya finished third in 2:25:01.

Nearly 41,000 runners took part in the race. (info from The International Heral Tribune)
Posted by Michael N. Marcus at 4:22 AM