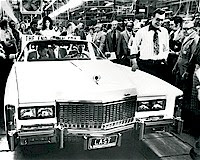 In the mid 1970s, it seemed like the American convertible would disappear, a victim to government safety concerns, sunroofs, T-tops and air conditioning. Chrysler and Ford had stopped making ragtops early in the decade, and by mid-decade GM was making just one, the huge bloated Cadillac Eldorado.

GM announced that there wouldn’t be a ’77 Eldorado convertible, and Caddy built the last 200 1976 models as an all-white "last American convertible" special edition. Speculators grabbed many of them, and carefully stashed them away in anticipation of re-selling them later at a huge profit.

GM, Cadillac, the speculators and the American auto industry, were wrong. Not only was the ’76 Eldo not the last American convertible, but it wasn’t even the last Eldorado convertible.

In 1980, Chrysler boss Lee Iacocca had a Chrysler coupe sent to a custom auto body shop in California, where it was rebuilt into a convertible. When Iacocca drove it around Boca Raton, Fla., in the winter of 1981, it won instant admirers. That limited market survey helped convince him that the potential demand for a revived convertible was bigger than anyone imagined.

From the moment they went on sale, the Chrysler LeBaron convertible and its sister car, the Dodge 400, were extremely successful: 24,000 were sold in 1982, vs. 3,000 projected by Chrysler. The four-seat LeBarons were snapped up by celebrities, moguls, babes, pimps, and ordinary folks looking to show off.

Iacocca's LeBaron got Detroit thinking topless once again and started the convertible renaissance. Now in the 21st century, convertibles are a basic part of the American car business, with a huge variety available from both American and foreign brands. (Info from Time & other sources)
Posted by Michael N. Marcus at 8:27 PM