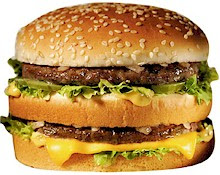 In 1968, the Big Mac burger became available in the whole McDonald's chain, after being invented by Jim Delligatti, one of the first McDonald's franchisees.

Sales really took off in 1975, with a commercial featuring the famous tongue-twister: "Two all beef patties, special sauce, lettuce, cheese, pickles, onions on a sesame seed bun." The phrase is a listing of the Big Mac ingredients, and was often spoken rapidly as a single word in ads. The first commercials ran only a year and a half, but the tongue-twister remained popular beyond its TV life.

McDonald's revived the phrase in 2003. In a commercial in the "I'm lovin' it" campaign, a rapper rapidly recites the Big Mac ingredients. Also in 2003, there was a Big Mac Christmas ornament that played the jingle.

In the 2004 documentary Super Size Me, several women were interviewed who couldn't correctly recite the Pledge of Allegiance, but could accurately recite the slogan.

In the late 1990s, Burger King offered a near-copy of the Big Mac, originally called the Double Supreme Cheeseburger, but later renamed the Big King. Some Burger King employees used to sing the McDonald's jingle while assembling Big Kings. (Info from Wikipedia, McDonalds and other sources)
Posted by Michael N. Marcus at 9:46 AM