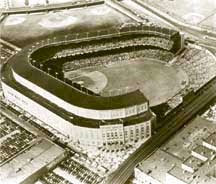 The first World Series game to be televised was the Sept. 30, 1947 opener between the New York Yankees and the Brooklyn Dodgers.

The game, at Yankee Stadium, was broadcast by WABD, WCBS, and WNBT in New York, and was also telecast in Philadelphia, Schenectady, and Washington.

The 1947 World Series brought in television's first mass audience, and was seen by an estimated 3.9 million people, mostly in bars. The 2006 Series was viewed by an estimated nearly 80 million viewers, mostly on couches.
Posted by Michael N. Marcus at 8:34 AM