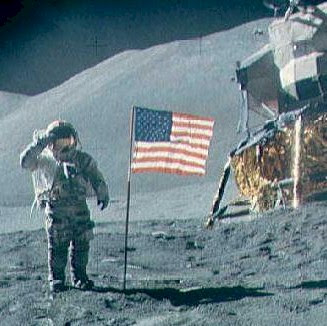 In the 1600s, famed Italian astronomer Galileo suggested that two objects of different weight would fall at the same speed.

A possibly apocryphal story says that he stood on the top of the Leaning Tower of Pisa with a feather and a stone in each hand and released them simultaneously.

Because the feather's structure slowed its descent like a parachute, the stone reached Earth first, so Galileo's theory was not proven.

It was not until Astronauts David Scott and Jim Irwin conducted Galileo's experiment on the Moon during their Apollo 15 mission in 1971, that the experiment could be duplicated properly. Without air to interfere, both objects made their lunar landings at the same time. (info & photo from NASA)
Posted by Michael N. Marcus at 4:47 AM