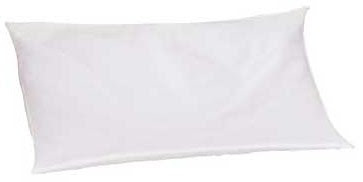 Pillows were used for decoration, and comfort on hard seating surfaces, as far back as ancient Egypt; but pillows that raise the head above the sleeping surface are a relatively recent development.

In 1523, London physician Sir Lester Maimonides was treating a male patient for what might now be considered sleep apnea -- a loss of the ability to breath during sleep.

The doctor thought the problem could be caused by his patient sleeping face-down, and partially inhaling the loose bed sheet, which blocked his nasal passages.

Maimonides constructed a U-shaped pillow by padding a section cut from an ale barrel, to cradle the patient's head face-up, and installed restraining straps to keep the patient from rotating.

The patient's sleep-breathing problem was instantly solved, but unfortunately, he died just a few weeks later from pneumonia. After his death, his daughter slept in his bed, without the straps, and loved using the special head cushion. She claimed she never slept better, and told friends and relatives, who clamored for "head-raisers" of their own.

Dr. Maimonides discontinued his medical practice, and became a full-time pillow maker. He even supplied the royal family, and was knighted for his invention.
Posted by Michael N. Marcus at 6:37 AM

At the risk of sounding like a spammer, to see the evolution of pillows, there is an alternative for resting comfortably facedown. I invented the SquidFace and ComfyRest pillows to relieve pain from my herniated neck disk while lying on my stomach in the sun with my head turned to the side to breathe. They are the only pillows that allow a person to sleep or rest truly facedown comfortably without having to strain their neck by turning their head to breathe. I have had acupuncture and it helps tremendously. Hopefully it may help you. SquidFace.com